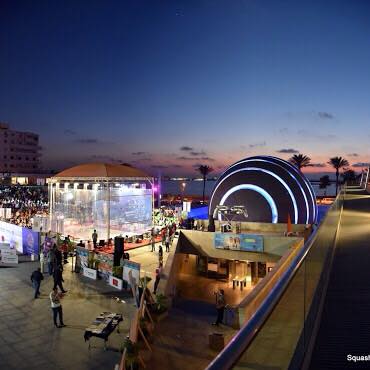 The tournament’s importance was exemplified the participation of the first 16 internationally ranked female players. El-Weleily added 4,800 points to her credit, to reach 23,090 points, and she is now a step closer to Malaysian Nicol David, who acquired 25,875 and is ranked first internationally.

Afterwards she played against the champion of Allam British Open Squash Championship in the WSA World Tour,French Camille Serme, ranked sixth internationally, where El-Weleily defeated Serme with a total score of 3-2. In the semi-final game, she achieved her fourth victory of the tournament against UK’s Laura Massaro, ranked fourth internationally, with a total score of 3-2.

The biggest surprise in the tournament was Abdel Kawy’s most challenging and remarkable win over Nicol David, in the semi-final round. David lost the tournament with a total score of 3-2. Abdel Kawy won the first two rounds, but David did not give up and won the other two games.

The final challenging victory was in the fifth round, where Abdel Kawy won with 12-10 points, and David lost her third consecutive championship held after the Windy City Open 2015 and Allam British Open Squash Championship 2015.