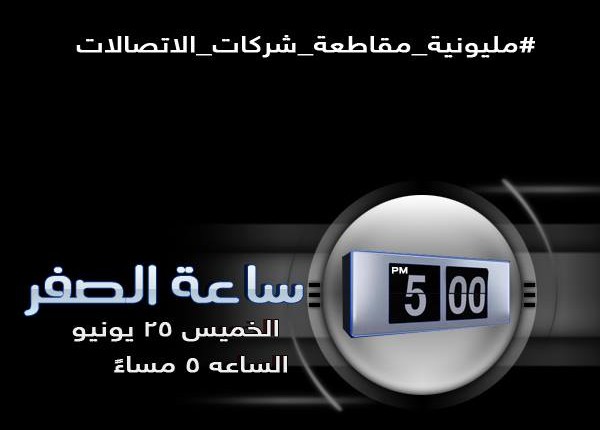 The “Internet Revolution” movement launched a campaign on Facebook to boycott telecommunication companies starting from 25 June. According to a movement official, the million man protest to boycott telecommunication companies aims to burden Internet operators with the highest losses possible. This is as a form of protest against the level of services to the local market. It will also impose pressure on companies to lower Internet prices.

He added that the first phase’s plan includes switching off phones for five hours as a way of protesting against the level of services and prices, in addition to burdening the companies with financial losses.

“If you speak on the phone for EGP 1 in these five hours, this could have a significant impact,” the official said.

The movement specified the boycott time from 5pm to 10pm, and so far more than 25,000 users intend to participate. The campaign targets 500,000 boycotts in the first phase.

The “Internet Revolution” movement is an Egyptian youth movement founded as a result of the low quality of Internet services and the price rises compared to other countries, in addition to bad customer service level. Youth on the Internet started to revolt against the slow speed and high prices compared to the rest of the world. They demanded that the Internet be offered at fair prices. The page so far has 936,000 users.

The demands of the movement are: to lower Internet prices to be convenient with the average global prices, increase the minimum Internet speed to be 8MB, and cancel the fair usage policy.