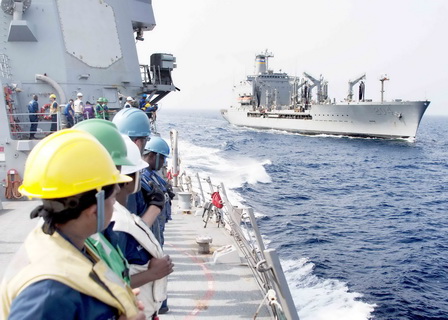 Egypt received two missile naval vessels from the US on Monday, in support of “Egypt’s security and the Egyptian people”, as both countries discussed upcoming strategic dialogue.

The US embassy in Cairo announced the delivery of two fast missile naval vessels to Alexandria port on board of a US transport ship. The embassy mentioned they will be integrated into the Egyptian Naval fleet in the coming weeks.

According to the embassy’s statement, its senior defence official in Cairo, Major General Charles Hooper, said: “This delivery is a sign of America’s ongoing commitment to Egypt and to our shared security interests in Egypt and the region.”

Hooper also said the vessels “directly supports maritime and regional security, which includes protecting vital waterways, such as the Suez Canal and the Red Sea”.

The arrival of the two vessels on 17 June added to another two vessels of the same type in the Egyptian fleet, also delivered by the US. It represents a $1.1bn investment by the US in the “bilateral strategic partnership”.

The US State Department’s spokesman John Kirby commented on the delivery telling journalists on Monday: “We have a defence relationship with Egypt that is particularly aimed at helping that country battle the terrorism threat inside the country.”