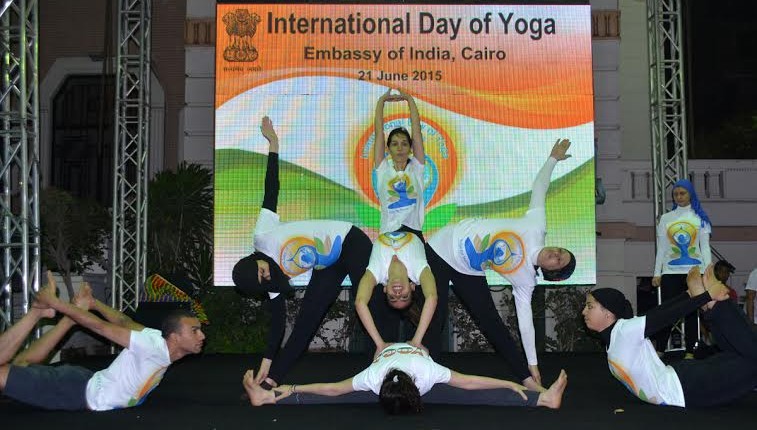 It was once said that “when you find peace within yourself, you become the kind of person who can live at peace with others”. Yoga is one of the main providers of peacefulness and harmony with one’s self, others and nature.

Last Sunday, International Yoga Day (IDY) was celebrated for the first time after the approval of the United Nation General Assembly in December 2014 with a record 177 co-sponsoring countries. This was in recognition of yoga’s holistic approach to health and well-being and the benefits that practice provides to the world population.

In celebration and appreciation of the huge role yoga has provided their culture, the Indian Embassy in Cairo hosted several events to celebrate the occasion.

“Yoga is a mesmerising part of our Indian culture,” said Sanjay Bhattacharyya, the Indian Ambassador in Egypt. “The difficulties of our lives drift us away from it for a while, but now we’re getting back to our old heritage.”

Bhattacharyya noted that yoga began in India long ago, but now belongs to the whole world. “It’s our own traditional medicine to several diseases but it’s developing to be a part of many lives as well,” he said.

“The practice of yoga brings peace of mind, reduces stress, improves health and brings people together in celebration,” the ambassador added.

The Indian Embassy in Egypt celebrated the day by holding yoga sessions at India House in Zamalek. A number of yoga schools and institutions in Egypt have joined hands with the embassy in the celebrations of International Yoga Day, with large numbers of attendees participating in the celebration.

People of all ages, from three to 70 years old, men and women, Egyptians and foreigners, first time yoga practitioners to regular yogis, were present.

Awareness about yoga in Egypt has grown over the years and many have sought specialised training in diverse yoga forms in India.  As a consequence, the popularity of yoga has grown and now people know how yoga can benefit and improve their lives.

Besides the above event, there were parallel events in two other locations and a number of events in the run-up to International Yoga Day.  The event itself was marked by great enthusiasm, spontaneity and joyous celebrations.  It was evident that yoga is much loved by the people of Egypt.

Using the celebration as a form of combining the two similar cultures was one of the main targets of the embassy.

“Both India and Egypt have ancient civilisations and rich culture and heritage,” continued the ambassador. “We believe it is important to host events that showcase our best practices and traditions, and the International Day of Yoga is the best example of doing so.”

Bhattacharyya sees that the similarities extend to cover all music and dance, literature and poetry, theatre and films, crafts and cuisines and even media and IT.

Some famous Egyptian public figures attended the celebration, which began after Iftar to late night. Emad Mete’b, an Egyptian football player, was the special guest of the event.

The embassy always aims to increase the contribution between the two cultures through developing new forms of interpersonal communication between people.  “Increasing people-to-people contacts will promote understanding and new forms of cooperation not only in cultural fields but also in our economic and social engagement,” Bhattacharyya stated.

Moreover, introducing people to another culture’s main lifestyle activity would help increase the understanding of the differences and similarities between both heritages, according to the ambassador.

The Maulana Azad Centre for Indian Culture (MACIC) holds language classes in Hindi and Urdu, meditation classes, and yoga classes for beginners and intermediate level on a regular basis.  The Indian Cultural Centre also conducts lectures, symposia, exhibitions on India, and dance classes. MACIC also does outreach activities with educational institutions and cultural centres both within and outside Cairo.

There are millions who practice yoga as a daily life routine, and it is estimated that around 20 million people practice yoga only in the United States, even though there are 10 different schools of yoga.

Moreover, the winners of the competition ‘Yoga in Egypt’ were announced at the celebration. The competition was held by the Indian Embassy to emphasise the importance of International Yoga Day.

The embassy conducted a photography contest online asking people to show their imagination and expertise of yoga in Egypt.  The winners were decided on the basis of maximum votes received on Facebook and were awarded a medal, a certificate and a gift during the celebrations at India House.

The competition was based in the MACIC, which has been conducting yoga classes since its inception in 1992.  The classes have become very popular among the Egyptian and expat communities.

Revealer of the Secret: the similarities between ancient and modern Egyptian civilisations