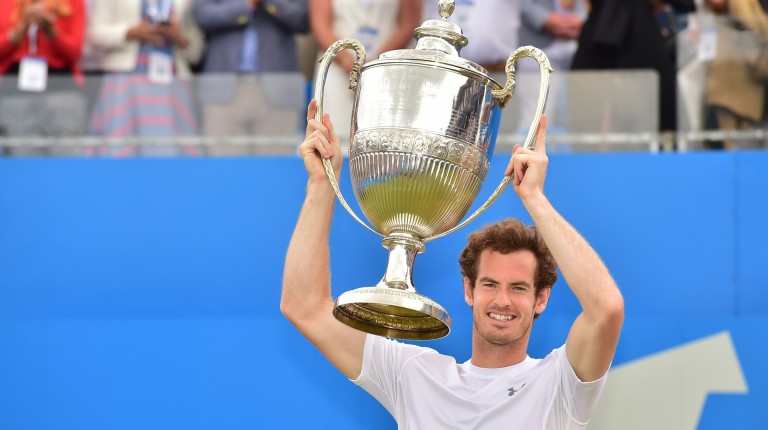 Britain’s Andy Murray won the Queen’s Club Championships, held annually in London, as part of the ATP World Tour 500 series and with total prize money of €1,696,645.

Murray is ranked World Number 3, and his win came at the expense of world number 1, Kevin Anderson, after Murray defeated him in the final with 4-6, 3-6. This way, Murray gained his fourth title in the English competition, having already won it in 2009, 2011, and 2013.

Murray started his journey at the championship by winning in the first round over Taiwanese player Lu Yen-hsun with 5-7, 4-6. He then met Spain’s Fernando Verdasco in the second round and won over him with 4-6, 5-7. In the quarter finals, Murray won over Dutch player Gilles Muller, ranked world number 48, with the scores 4-6, 6-7, and 6-3. His journey in the championship continued as he won the semi-final over Serbia’s Viktor Troicki with 6-7, 3-6.

The doubles title of the English championship was snatched by France’s Pierre-Hugues Herbert and his partner Nicolas Mahut, after they won the final game against Poland’s Marcin Matkowski and his Serbian partner Nenad Zimonjić with 2-6, 2-6. This is is France’s first since 1987, when it was won by Guy Forget and his partner Yannick Noah.

Roger Federer, ranked world number 2, won the 23rd Halle Open competition, which is also within the ATP World Tour 500 series. Federer won the title by defeating Italy’s Andreas Seppi, world number 45, in the final game with 4-6, 6-7, making Federer the championship’s most crowned player, as he has won it eight times.

Federer went through five wins on his journey towards the title, the first of which was against Germany’s Philipp Kohlschreiber in the first round of the championship with 6-7, 6-3,  6-7. In the second round, Federer won over Latvian player Ernests Gulbis with 5-7, 3-6, before qualifying to the quarter finals where he defeated Germany’s Florian Mayer with 0-6, 6-7. Federer achieved his fourth win against the Croatian Ivo Karlović in the semi finals with 6-7 and 6-7.

In the competition’s Men’s Doubles, victory came for South African player Raven Klaasen and his American partner Rajeef Ram, as they won the final against the Indian Rohan Bopanna and his Belgian partner Florin Mergea with 2-6, 6-7.