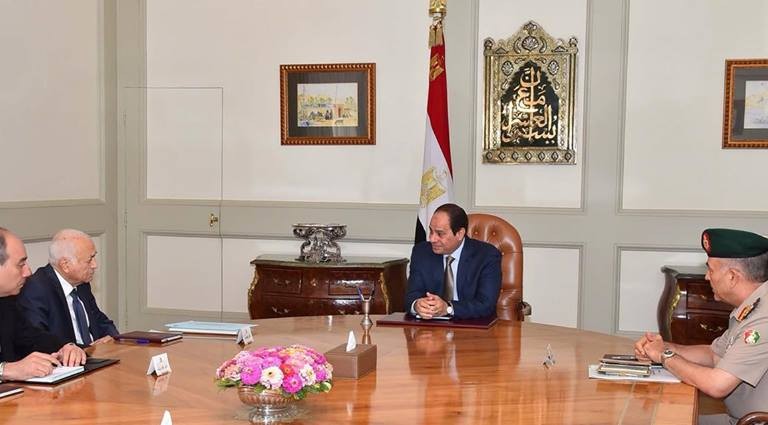 President Abdel Fattah Al-Sisi, as the current chairman of the Arab Summit, received the draft protocol to establish the “Joint Arab Forces”, according to an official statement.

This came during a meeting with Arab League Secretary General Nabil El-Araby and Chief-of-Staff of the Egyptian Armed Forces Mahmoud Hegazy.

The protocol will be presented to the Joint Defence Council to be approved, after consultations with Kuwait, last year’s Arab League host, and Morocco, Egypt’s successor as host, as well as with the other Arab League member states.

Al-Sisi stated the force would be “a force to defend, not to attack”, and that it was also meant to be used in a humanitarian capacity, as a disaster relief force. He also said the force would be used “in the protection of civilians in situations of emergency resulting from the outbreak of armed conflict”.

Further, Nabil El-Araby stated that the joint forces’ purpose is “to meet challenges that threaten the security and safety of any of the Arab states”, and to preserve national security against direct threats, “in particular threats of terrorism”.

He also called the protocol the “result of the consultations” on the military and the political level. Before drafting the protocol, Hegazy held meetings with the member states’ Chiefs-of-Staff, while amendments proposed by member states were also integrated.

The proposal for a Joint Arab Force was originally adopted during the Arab League summit in Sharm El-Sheikh in March, and was developed afterwards under supervision of a team of the Chiefs-of-Staff. Arab states can join the force on a volunteer basis.