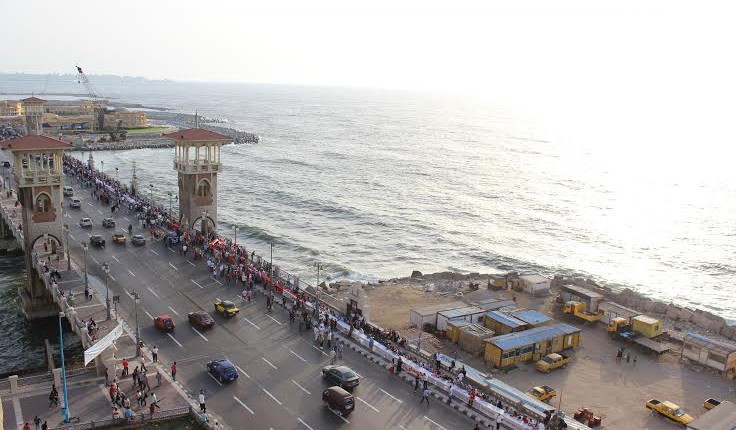 A 4.3 km line of tables on the seaside gained Alexandria a place in the Guinness Book of World Records on Friday.

The line, which surpassed Italy’s 2 km line in July 2014, was put together with the aim of promoting Alexandria worldwide. It stretched from Sidi Gaber in the east to Al-Mahrousa in the west of the Mediterranean city.

More than 6,000 people registered for the event, but thousands more turned up to the public event sponsored by dozens of hotels, restaurants and businesses.

The event was attended by Alexandria Governor Hani El-Messery and US Consul General in Alexandria Stephen Fakan.

“To the many families who offered me part of their breakfast as I passed by… Alexandria is truly a great city and that is because it has great people,” Fakan said on his Facebook page.

However, things soon took a turn for the worse.

An hour before Iftar time, some people’s tempers started to dampen, and quarrels started.

The people who had come to eat had registered for the event, but were asked to change seats several times, said Nihal Khalil, an organiser with one of the sponsoring hotels. Some of those who hadn’t registered were trying to forcibly take a place, she said. A lot of people were not seated in the end, Khalil stated.

By Iftar time, parts of the table witnessed huge fights. Some wanted more food than allocated, others physically attacked food cars, and the road was blocked when a number of people fought with chairs and broke the tables.

A group blamed the incidents on the weak organisation of the event and the late arrival of food, while others placed blame on the lack of civilised manners.

The main organisers of the event were “Radioactive” group, along with the governorate.

A third group, which included the 6 April Youth Movement, took a political approach to the event, criticising the whole “scandalous” notion while the people are “hungry” and below the poverty line.  By nighttime, the 4 km line of tables turned into a 4 km line of trash

“Everything was fascinating and beautiful before people came,” Khalil said.