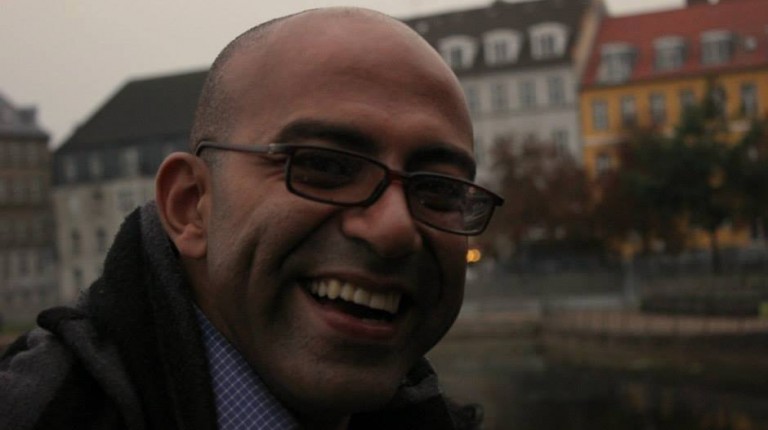 “I like to say completely serious things, but I don’t mean them at all.” The flamboyant journalist, translator and writer Nael El-Toukhy was long-listed earlier this month for the FT/Oppenheimer Funds Emerging Voices Awards, designed to “recognise artistic talent across more than 100 emerging market nations”.

The awards celebrate “the most exciting writers, film-makers and artists coming out of emerging markets in Africa, the Middle East, Asia and Latin America”. El-Toukhy’s dark humour, as it appears in a novel about the life of three generations of a family in a futuristic dystopian world that sheds light on the dark side of the supposedly cosmopolitan Alexandria, merited him a place on the long list. El-Toukhy is among accomplished and veteran novelists from Africa and the Middle East.

El-Toukhy’s “Women of Karantina” was published in 2013, winning plaudits from readers and critics alike, as it takes on the life of a fugitive couple, Ali and Injy, who flee their life in Cairo, after it was tainted by a murder, and go to Alexandria. There, they find themselves dragged further still into a criminal society, and eventually establish their own criminal legacy through three generations of the family.

El-Toukhy, 34, is a journalist for the literature-focused Akhabr Al-Adab, a translator who translated two novels from Hebrew, and one of the few in Egypt who write on Israeli literature. “Women of Karantina”, which was translated to English in 2014, is his second novel after the novel “2006”, as well as two novellas: Laila Antoun and Babylon, and a short-story collection entitled “Artistic Changes”.

The FT/Oppenheimer Fund awards recognises the most exciting and inventive writers. How do you feel about being long-listed in the fiction category of the awards?

I’m happy and very proud, and especially because I’m long-listed with one of my mentors, whom I have all the appreciation and respect for; Elias Khoury, who is one of the few in the Arab world who, for me, can represent the meaning of an intellect as I understand it.

How did it feel seeing your name being selected over more established names who applied for the award (Jabbour Douehy, Ibrahim El-Kouny, Sonalla Ibrahim and others) as more exciting and inventive?

It’s really nice, but I’ll never know how the prizes are given, simply because it is hard for me to imagine that my novel is “better” than all the novels that applied to the award, and that’s for two reasons: objective and pragmatic.

The objective reason is that it [the novel] is definitely not better than the others. The pragmatic reason is that if I believed that my novel, while I’m 36 years of age, is better, that will mean I don’t have more to give.

You decided you will write a novel that tells a story of generations. How did you plan for that?

There was planning for it to be generations’ novel, to be about three generations of a family and for the family to start from two persons, Ali and Injy, who begin the tale in Alexandria. That was my planning.

In the middle, the character Hamada came in. I can’t exactly remember if I thought at first that the family will end up being all female.

What I can tell you is at the beginning, planning the structure of the novel was very abstract. There was not much planning, at the end I’m a bohemian writer; I write the way I like.

Talk to us about one of the main characters, Injy, the girl from the American University in Cairo, whose dad works in the UAE and who took up the guise of a Salafist, while simultaneously pimping prostitutes in Alexandria?

I had a problem with the character, or a mistake; that is her language at the beginning of the novels differs totally from her language in the middle.

As for her world and lifestyle, I will not hide from you, I hated her very much in the first part, because you feel she is a real bitch who is nagging Ali about everything. I hate this type very much; I actually felt she improved when she moved to Karantina; she became human.

You ended your novel in an explosive fashion. Did you feel that you could have given it more room or was it the right way to end it?

The ending fits. I like last chapter of the novel especially, because it has more sadness than the other two chapters, where the second chapter, in which Hamada’s character shines, is full of laughter.

I like the last chapter a bit more because it has the exact tone I want: very sad and very tragic but at the same time comedic. This is what I like more, especially with Amira’s tendency towards purification; that she is always attracted to something mystical, as she is the most spiritual among the girls.

She is always thinking of getting rid of their world. The girls are driven in this way under the effect of their frustration, more than anything else. The solution for all of them was to end the story once and for all.

But it did not actually end very much; it did not put an end the world they live in.

What were you expecting? That the police intervene? There is no end to this. Say I added seven more generations to the novel… it can go forever.

A number of your characters had a Salafist influence on part of their lives. How much of reality does that reflect?

It used to get my attention that the writers of the ‘60s and the ‘70s used to look at the Salafist way of life as something purely ideological. They didn’t go into their actual lives, they couldn’t sympathise with a Salafist person. I always thought that worlds that are very rich in detail can be extracted from these sides.

First I thought about the world of the characters, before thinking of them and of the incidents. Mostly, in slum neighbourhoods, people become Salafis because they have nothing else to crow about. It is a very inexpensive way to express mastery over others; a source of power.

It is Salafism that is associated with a common conservative culture where the appearances of a religious person matters most. There are herds of Salafists in Egypt who are what they are for no reason other than this is the way to get by in life.

When Ali and Injy moved to Alexandria they were looking for a source of power; what could that be in a place you go to for the first time? A mosque: build a mosque or a sabil [a charitable source of water].

The Salafism decreases after the first chapter as the characters escape the restriction of this life.

Your novel mentions local unknown heroes whose tales are being preserved among their own people. What can you tell us about that?

Every place creates its own icons and legends. Those are the heroes of Alexandria, like Harby, whose character I really admire. The novel is based on the concept of history, how you give meaning to your own history, and more importantly, how you remember your history?

There is Ali and Injy’s search for their grandfather and the contradicting tales about who he was, and there is Om Salah who was trying to recall the history of Nadia and E’temad and meanwhile linking it to the history of [Alexandria’s infamous 20th century’s killers] Rayya and Sekina.

All the time, there are things happening around and with the history of these incidents that are not written down, and with the passing of time, the memories of incidents enlarge and things get added and mixed until you reach a popular version of history.

I had an old dream to write on how heroes remember their history, so when I found myself writing a novel of generations, I told myself, why not work on the idea of how a memory is formed. History or is the obsession of all the novel’s characters.

Your novel prompted many comments about the language used and the obscenity. Where do you stand on this?

The nice thing is that even when people are not comfortable with the language, and I have seen this more on Goodreads, they enjoyed the novel, and that is satisfying to me.

I like the befouled reality style, everyone has their own taste, and it is comfortable for me to write in it. What makes me proud is that despite the obscene style, the novel was well read and it didn’t become an issue.

Away from the novel; as a Hebrew translator and one of the few who writes about Hebrew literature in Arabic, do think you will write a literary work related to this?

It is possible, but not now. It is true I’m interested in the Hebrew literature, but for instance I’ve never been to Israel, meaning I didn’t see it. I’ve heard and read but never saw, and so something big is missing. I’d be talking about something I didn’t see.

It is even hard for me now to write something theoretical on Hebrew literature. I mostly translate because simply I don’t have enough knowledge yet.

But there is also the path of tracking down the tales of the Jews who lived or are still living in Egypt.

The subject of Egypt’s Jews is not interesting for me. First of all, you can track this subject without the Hebrew language, whether via Arabic, English or French. Of course you can do this via Hebrew, but you can also do it using other languages with the same efficiency.

From another side, Egypt’s Jews were considered Khawagat [colloquial term for foreigners commonly used in the 20th century], most of them were of higher class with higher education, unlike Iraq’s Jews for example, who were the same as Iraq’s Muslims and Christians, and so Iraq’s Jews would be more interesting subject to me.

Add to this that there were few Egyptian Jews who went to Israel, and I’m more interested in Israel. Egypt’s Jews preferred France, as Israel was a new state they couldn’t gamble their lives on.

A second reason is that subject has been painstakingly researched, and is being tackled almost exclusively from a perspective that says we were all good together, and that there was tolerance in Egypt.

Most of the works that tackle Egypt’s Jews focus on them being Egyptians like the rest of Egyptians, but what else? What about them being Jews? Shouldn’t we talk about that?

After “Women of Karantina”, what is next for you?

My latest production is a translation of an Israeli novel by Almog Behar that is supposed to be published this year, and there is writing project I started on, but there are no details yet.