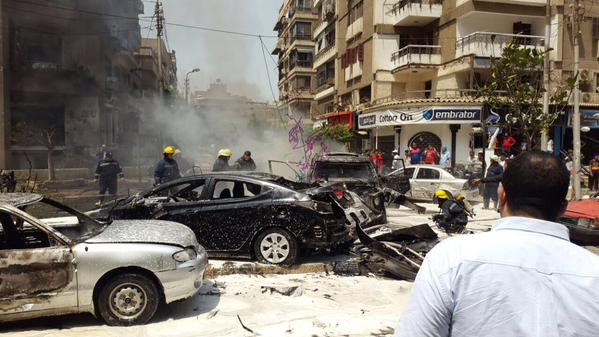 Egyptian Prosecutor General Hisham Barakat was injured in an explosion that targeted his security convoy Monday morning in the Heliopolis district of Cairo, according to state-run newspaper Al-Ahram.

The attack was claimed by the ‘Giza Popular Resistance’ militant group on their Facebook page.

A Heliopolis resident told Daily News Egypt they heard the explosion early Monday, and stepped onto their balcony to see a damaged motorcycle.

The witness also said there was an exploded vehicle, which according to the testimony, was Barakat’s security vehicle. The witness added that surrounding vehicles were in flames.

The damages on the attack scene included seven other injuries from Barakat’s staff and passengers, in addition to damages to 35 cars and nine houses in the area of the explosion.

Health Ministry Spokesman Hossam Abdel Ghaffar told Daily News Egypt that Barakat sustained a nose injury and a dislocated shoulder. He disclosed that he was operated on for minor injuries, and is now in “very” stable condition.

He added that he was treated in Nozha hospital. He also said that there were three other injured persons and they are being treated in Heliopolis hospital, and that their condition is also stable.

In the first of the reactions to the bombing, the National Council for Human Rights (NCHR) condemned the “terrorist attack”, stating it aims at destabilising the state, and demanding that the international community support Egypt in countering terrorism.

The attack on Barakat is the Giza Popular Resistance’s most high-profile operation, as the group has previously only conducted relatively minor attacks, such as setting fire to a UAE bank in Giza in February.

The group previously released photos showing its members blocking roads and torching police vans. They also claimed that they targeted “thugs” who dispersed anti-government demonstrations. On 31 January, they claimed two attacks in Fayoum. One was on a police station and the other on a security patrol, saying they were retaliating for “attacks by the coup militias on peaceful protesters”.

Barakat was appointed to his post by then-interim president Adly Mansour, shortly after former president Mohamed Morsi of the Muslim Brotherhood was removed from power.

Judges and other officials have also recently been targeted by Egyptian militants, seeking revenge for what they consider to be a military coup against Morsi.

Hours before the attack, “Islamic State” affiliates in North Sinai, known as “State of Sinai”, posted a new video Sunday evening featuring the assassination of three judges in May. The video went viral through social media networks, under the name of “Extermination of Judges”.

The attack also occurred one day before the second anniversary of the 30 June popular uprising that eventually led to the ouster of the Islamist government of the Brotherhood.

Media reports on Saturday revealed plans to deploy 120,000 army and police troops to secure the country and counter terrorist attacks.

Following Morsi’s ouster, the Egyptian government declared the Brotherhood a terrorist organisation, and Barakat ordered the arrests, travel bans and freezing of assets of a large number of the group’s top members, as well as medium-ranking members.

Egypt has been facing a gruelling war on extremist violence which is mainly focused in the North Sinai region, where most attacks are claimed by “State of Sinai”.