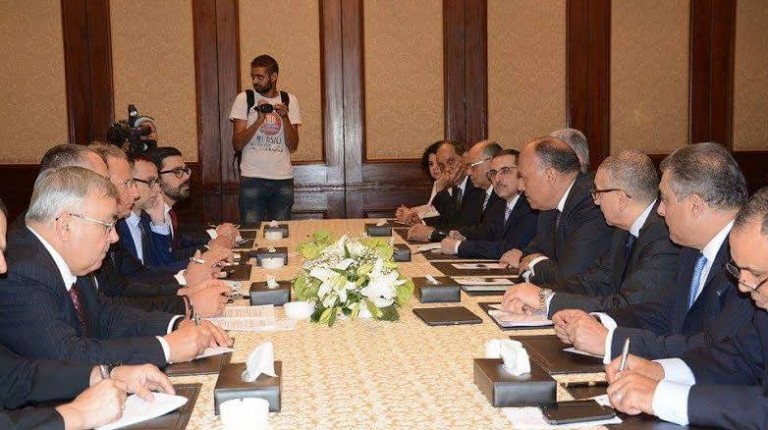 Egyptian Foreign Minister Sameh Shoukry received the envoys of the Quartet on the Middle East Tuesday morning to discuss ways to resume the peace process between Israel and Palestine, according to a statement to Daily News Egypt by the Foreign Ministry.

Shoukry stressed the importance of countering terrorism after Monday’s assassination of the Egyptian Prosecutor General, saying terrorism “requires firm and serious acts by the international community”. He also stated that there would be “no stability and security in the region without a lasting and just solution to the Palestinian issue”.

The minister also mentioned the recent meetings of the Arab Ministerial Committee earlier this month with French Foreign Minister Laurent Fabius, who came up with an initiative to restart the peace process. The move was immediately criticised by Israeli Prime Minister Netanyahu as something “they are trying to force upon us”.

Shoukry expressed his hopes of following up on that recent initiative, claiming it was of “critical importance to stop settlement activity in the occupied territories”. Shoukry further highlighted the minor role played by the quartet previously, stating that they should be “addressing […] the importance of activating the role of the quartet in the coming period”.

The quartet confirmed the link between the fight against terrorism and the Palestinian issue, and said it chose Cairo to restart the peace process “because of its [Egypt’s] significant regional weight and the importance of listening to its vision towards the Palestinian issue”.

The Middle East Quartet was formed after the second Intifada in 2000 to broker peace efforts between the rivalling factions in the Israel-Palestine conflict. Earlier this month, its Special Envoy Tony Blair resigned from his post, having been heavily criticised, especially by Palestinian authorities, for the lack of progress the quartet made during his eight years in service.

Participants of the meeting included representatives from the UN, the EU, the US, and Russia with its Middle East envoy Sergey Vershinin.

In a special meeting between Shoukry and Vershinin, the two diplomats also discussed possible solutions to the Libyan and the Syrian crises, reiterating their support for UN envoy to Libya Bernardino Leon and their conviction of finding a “political solution on the basis of the decisions of the Geneva-1 conference” to the issue in Libya.

Vershinin is the Russian Foreign Ministry’s Director for the Middle East and North Africa since the early 2000s, and is considered an important figure in Russian Middle Eastern policy according to cables from the US State Department, published by Wikileaks in 2013.