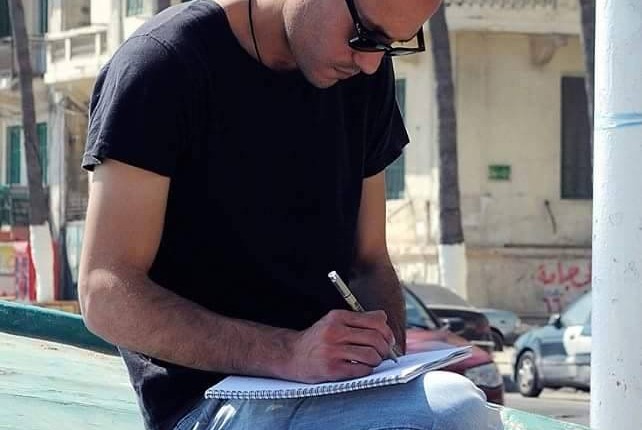 In an attempt to document the remains of Alexandria and its architectural heritage, a group of 12 volunteer sketchers, artists, photographers and documenters launched a non-profit initiative titled “Description of Alexandria”. The project is a step towards fighting the destruction of the city’s old buildings that represent a main part of its unique heritage.

The project started in 2014 as a call for participation in a sketching project to draw Alexandria, aiming to present a true and actual image of today’s Mediterranean city.  It aims to highlight the remains of the past as well as promoting tourism and investment in the city, and raising Alexandrians’ awareness about the cultural and historical values of their own city, simultaneously.

“The very beginning of the project was in 2009, when I was working on a research and a renovation project for a small fishermen’s village in Alexandria,” says Gohar, an architect, researcher and sketcher and the founder of the project. “I did an investigation with the people there and translated their problems into an architectural solution, but I didn’t present them as fully architectural drawings.”

He added: “They were more like artistic drawings as they were simple and clear enough for people to understand, and eventually everyone started to recognise and memorise his house.”

Since that time, Gohar realised that he might use his drawings to do something useful for Alexandria. “I started to sketch and record many buildings and places in the city, doing some workshops and exhibitions to spread the idea,” he said.

In 2012, Gohar started a group with two young architects and called it “Alexandria urban sketchers”. The main aim was to explore Alexandria and teach young architects how to sketch and how to express themselves. “We used to draw a new building or site in Alexandria every weekend,” he noted.

After a year, Gohar had a big set of drawings that carried a “describing Alexandria” theme. In order to record them and let other Alexandrians see how the city is still beautiful and has opportunities, he tried to publish them in a book titled “Description of Alexandria”. Unfortunately, life wasn’t as easy as he expected!

“The thing is I couldn’t find any publisher; because it was just an art book and that kind of books is not highly sellable, as the publishers said. In fact, it was superficial and the idea itself wasn’t complete,” he added.

He then spent months studying relevant projects, until the idea was finally shaped and ready to be converted from the personal level of documentation to such a national documentation project, where all Alexandrian architects, artist, researchers and writers could participate and work for their city.

However, “Description of Alexandria” is not a full professional documentation, or at least until now.

“In our case, I believe it’s useful, because most of the time we start from scratch and we collect new information about the buildings, we produce new drawings and new visual memory that never existed before. It’s a fact that we remember things better when they’re attached to a picture and that could be a good start for another researcher or architect to build something on and do more advanced research,” Gohar asserted.

One of the main aims of the project was to raise the Alexandrians’ awareness about their city and its heritage, culture and identity and to enhance the engagement of the society in preserving their legacy before we lose it forever.

“By the implementation of the project, we could turn every Alexandrian citizen into a memory device who will keep our history in their minds and souls and pass it from generation to generation,” Gohar noted.

To gather volunteer sketchers and documentaries for the project’s team work, Gohar launched a call for volunteers on the social networks to gather the qualified team who will be in charge of sketching, drawing, collecting information and writing. The 12 team members started on the 14 March 2014 from the oldest site in Alexandria, Pharos Island where the ancient light house of Alexandria was once there and now stands instead of it the fort of Qaitbay.

“As an Alexandrian, it was a smart yet interesting idea to join in the project, in the hope of saving what remains of our city’s heritage,” said Arwa Hany a 25-year-old Alexandrian architect, and one of the leading members of the team.

“By participating in the Wasf Alexandria project, I gained more experience as an architect by learning more about the history of Alexandria and the different styles of architecture of the buildings that are the image of the city’s Architectural heritage. Also it was a great chance to improve my talent as a sketcher by working with a talented team, and it gave me a great opportunity to discover more of the city which I live in,” she added.

Moreover, Hany explains how the project’s documentation process is verified in three stages: collecting data about the buildings; sketching different perspectives of the buildings, their main facades and the surrounding urban life; and thirdly by photography.

“Every building we document and every place has its own value and history, so with every new documentation, we would live a valuable new experience and gain more knowledge,” she noted.

Until now, the project has covered 21 important buildings in the city, including the Jesuit cultural centre, the Swedish Institute, Spahi Villa, and many others.

“Mainly the project is fragmented into phases that cover the whole area of the old city. These phases start with the buildings along the Corniche Street, of which the Swedish Institute stands as a vital part. And as we go on with the process we would find buildings, threatened to be demolished within a short term, that we would rush to document. This was the case with Spahi villa,” Hany noted.

On the other hand, Mai Koraiem, one of the project’s main artists believes this project provided her with a life time experience that she would never forget. “I joined the team, because I believe in the idea which resembles an innovative experience for me. Drawing the old Alexandrian buildings and the Alexandrian people themselves is a rich experience that helps you recognise the history of your country, how it was and how it’s becoming. For me, discovering new places with new stories is a breathtaking adventure I look forward to experiencing everyday,” she added.

Although working on such a project requires much time, money and effort, the team members never get bored or lose hope.

“The project is not profitable at all and it consumes too much time as we need to meet twice a week and we almost work on it every day. However, we will never surrender our dreams,” Gohar asserted.

However, he plans to establish the “Description of Alexandria Institute” soon.

“The institute will be concerned only with our city and will be dedicated to studying its culture and heritage. I wish one day we would be able to document and cover all Alexandria,” he added.