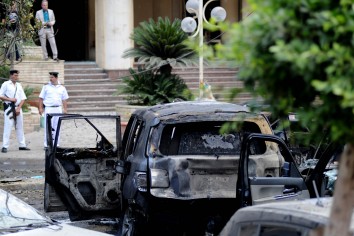 The Monday assassination of Prosecutor General Hisham Barakat represents a turning point, and the official response should be different from its previous efforts, according to a joint statement by Egyptian NGOs on Tuesday.

The NGOs added that “the official response should not stick to the same methods that have led to the current impasse…and the only way to break this vicious cycle of extremism and violence is to adopt political solutions by means of open, inclusive dialogue”.

Several Egyptian NGOs condemned Barakat’s assassination, asserting that this was the latest in a series of attempts that “explicitly and systematically” target judges and legal professionals over the past months.

Barakat died Monday afternoon in Nozha Hospital due to injuries sustained in an attack that targeted his motorcade earlier in the day in the Heliopolis district of Cairo. Security forces arrested Tuesday a 23-year-old man who claimed a pro-Morsi group, calling itself the Giza Popular Resistance Brigades, was responsible for killing Barakat on a Facebook page carrying the group’s name, according to state-owned news agency MENA.

The Egyptian Initiative for Personal Rights (EIPR), the Association for Freedom of Thought and Expression (AFTE), and the Egyptian Centre for Economic and Social Rights (ECESR), amongst others, called for opening an independent and public investigation into the incident without resorting to “exceptional measures that usually fail at bringing the real perpetrators to justice”.

The joint statement confirmed that further trampling on civil and political rights and freedoms by security forces would not serve as a viable solution for addressing threats. This is since recently taken measures, including the expanded use of capital punishment and increased torture in prisons, have only served as triggers for more threats and a missed opportunity at social dialogue.

Human Rights Watch (HRW) stated in a press release on Tuesday that Barakat’s killing represents “a dangerous moment for the rule of law in Egypt and a new shift in anti-government violence”. HRW added that it should “serve as a warning that serious abuse and deterioration of the rule of law in Egypt over the past two years has contributed to a fertile environment for violence”.

Shortly after Barakat’s funeral, President Abdel Fattah Al-Sisi announced expected legal amendments to take place to speed up trials and the implementation of verdicts. Al-Sisi said the Penal Code contains “obstacles to judges’ work, mainly in preventing punishment of those who shed the blood of Egyptians”.

Judge Nagy Shehata, head of the Giza Criminal Court, said in a phone interview on satellite channel Sada Al-Balad, that he found his name on top of the list of targeted judges.

Shehata put forth suggested amendments to the criminal procedure code in order to be able to implement the verdicts issued. He suggested that all high profile cases should be transferred to the Supreme State Security Court, meaning that verdicts are ratified by the president within 30-60 days, and are not subjected to the Court of Cassation review.  With regards to eyewitnesses, Shehata suggested that the court should not be obliged to listen to all witnesses, commenting that “slow justice is a form of injustice”.

Allegedly, only the Giza Popular Resistance group claimed responsibility for the attacks on its Facebook page. However, the State Information Service (SIS) put the blame on the Muslim Brotherhood, designated as a terrorist organisation since December 2013, hours after the killing without presenting evidence.

The Egyptian Revolutionary Council (ERC), which includes an array of politicians and intellectuals based in Istanbul and calls for the restoration of ousted president Mohamed Morsi, condemned Tuesday the bomb attack that led to Barakat’s death. It further stated that the “repressive policies” pursued by the regime has increased violence and destabilised society.

The Revolutionary Socialists stated that the former prosecutor was “among the most important figures of the counter-revolution regime, who enabled the transformation of the prosecution and the judiciary into political tools and jeopardised the independence of the judiciary”.

However, the group contends that assassination does not realise retribution for the “thousands of Barakat’s victims, but only aides our enemies in exercising more repression”. It believes that only revolutionary trials, administered by the masses, would be able to try “everyone who played a role in the counter-revolution”.

News of the assassination was received with grief and condemnation by different local political and social figures, parties, and organisations. It was also met with regional and international condemnations.