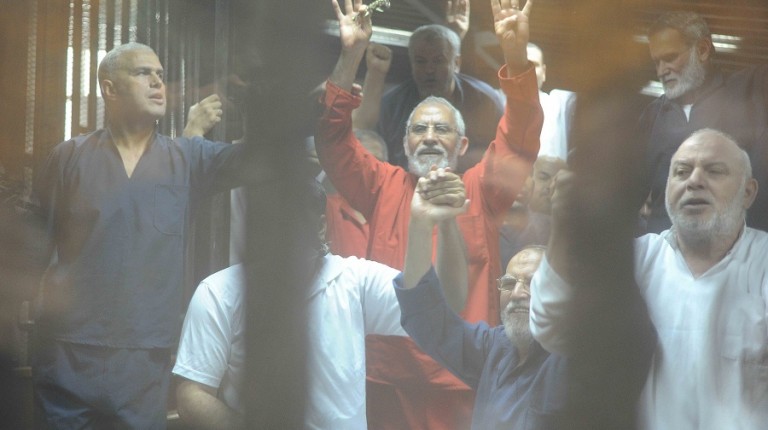 A number of journalists have said they were arrested outside the Zeinhom morgue as they were covering the Muslim Brotherhood killings Wednesday evening, according to the Journalists Against Torture Observatory.

According to the Ministry of Interior, the men were killed in an “exchange of fire”.  There were no police injuries or deaths reported.

Mohamed Shabrawy, a reporter with Al-Masriya newspaper, told the Journalists against Torture Observatory: “During my coverage of the moments that the dead bodies of the Muslim Brotherhood member arrived in on Wednesday 1 July, I was surprised [to learn] that a number of security forces have arrested people in vicinities of the morgue.”

Shabrawy then stated that he and two more journalists were also arrested.

“I was detained near the morgue for an hour, they took my journalistic supplies, my journalism card, and they searched me. They let me go after a phone conversation with national security,” he added, noting that he left the area after security forces released him, but that his colleagues were still detained.

Further, Belal Wagdy, a photojournalist who spoke to the families of the deceased, said that “the families found out about the killings from [the newspapers] Al-Watan and Al-Youm 7”.

According to Wagdy, the nine men were meeting inside the apartment to discuss issues related to the support of Brotherhood detainees when they were arrested in the early morning.

“It is likely that they were taken to the 6th of October City police station, where they were fingerprinted, killed, and then taken back to the apartment where their bodies were thrown next to weapons… and [the police] came up with the story that there were clashes,” Wagdy said, adding that the official story is not true.

A Ministry of Interior statementsaid the Brotherhood members were meeting to “discuss the plans and movements of the terrorist organisation over the upcoming period, to ruin important and lively institutions during celebrations of the 30 June revolution”.

The official statement was released with two photographs of dead bodies with gunshot wounds lying next to weapons, as well as one photograph of the outside of an apartment building where the Brotherhood members had allegedly been found.

The ministry also stated that the deceased were accused of “killing, violence, and terrorism”.

Meanwhile, eyewitness accounts from inside the morgue also stated that fingerprints were taken from the deceased, according to the observatory.

Among those killed were Nasser El-Hafy, a lawyer, Taher Ismail, a doctor, Gamal Khalifa, a paediatrician, and Moetasem Al-Eigizy.

A 6 April Youth Movement branch based in Mansoura said that Moetasem Al-Eigizy was the first Student Union president at Mansoura University after the 25 January Revolution.

“During that time period there was cooperation between the 6 April movement and all the political groups on campus under the student union that Moetasem led,” the observatory said.