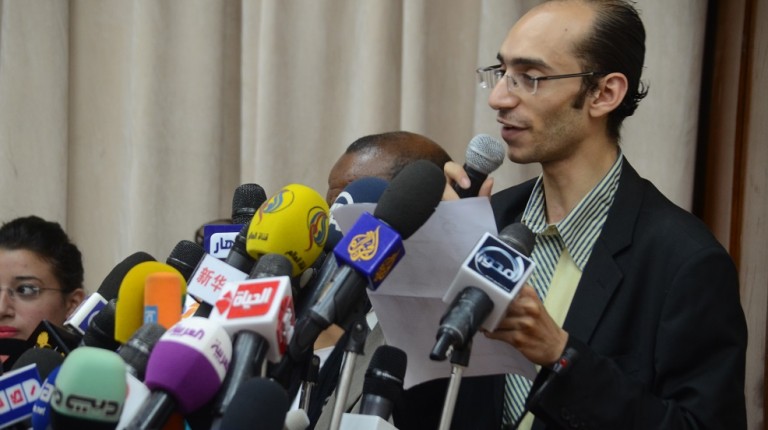 On 30 June 2013, Mohamed Morsi completed one presidential year, only to be met with the establishment of a strong opposition front in the face of the Muslim Brotherhood, later backed by the military.

In the weeks before 30 June, many Egyptians signed a document that was circulated in both Arabic and English, entitled “Tamarod” (Rebel). It demanded signatures to withdraw confidence from former president Mohamed Morsi.

At the time, Tamarod was a civil group founded by some activists, including some who had elected Morsi as president, such as Mahmoud Badr. It inspired a rebellious uprising against the Muslim Brotherhood regime.

But soon after, Tamarod seemed to have fallen under the control of the army, namely general Abdel Fattah Al-Sisi, who was the defence minister at the time. Badr had stated in an interview with Reuters in 2013 that army officials had submitted to his demands when he called for an emergency meeting with them ahead of Morsi’s ouster.

Despite that, it is believed that the military intervention in 30 June later tore the group apart. Its young founders Badr, Mohamed Abdel Aziz and Hassan Shahin became involved in a conflict with each other over which presidential candidate to support in the 2014 elections: Al-Sisi, or his rival Hamdeen Sabbahi.

Since then, it seems that the group has been suffering the rebellion of its own people, as several co-founders withdrew from it in different events. Group members have been targeted by local media headlines, spreading an image of “betrayal” and “chaos”.

In comparison with 2013, Tamarod is no longer the movement people knew it for.

Hanem El-Temsah, a former member of the resistance group “Kefaya” which opposed Hosni Mubarak, was one of the initial founders of Tamarod, before Badr and the others. When speaking about the origins and development of the movement, El-Temsah clarified: “Tamarod was never a movement, it was a campaign.”

In an interview with Daily News Egypt, Temsah said that when she and her colleagues decided to start Tamarod, there were specific circumstances which required specific purposes within a defined time frame.

“After Morsi was out of the picture, it should have ended, because that is what the people originally supported us for doing,” El-Temsah explained.

According to El-Temsah and several former members of the group, Tamarod deviated from its goals when some of its members started pursuing personal gains or rewards for their role in 30 June, despite supposedly acting out of patriotism with no expected return, for the well-being of the state and the people.

“Another problem is that that the group continued to speak on behalf of the Egyptian people, under the umbrella of a political movement,” El-Temsah said. “While this was accepted on 30 June, because people wanted to overthrow Morsi, it was rejected after that or for life.”

El-Temsah wondered how the group, or the Muslim Brotherhood, could claim they represent “the people”, and how could they know what each individual in the society wants to express.

Today, El-Temsah believes it is over for Tamarod. Meanwhile, the group run by Badr, adopts a less rebellious rhetoric, and a much more pro-state approach.

On one hand, Badr is pushing Tamarod into the camp of political ‘elites’ by aiming at entering an electoral coalition called “For the love of Egypt”, which comprises former military and police leaders, figures from the old regimes, and was highly suspected of being backed by the state.

Badr’s Tamarod had hoped to become an officially established party under the name of “The Popular Arab Movement”,but was rejected by the state’s committee for parliamentary affairs and court for failing to follow legal procedures concerning the party’s construction, financial organisation and so on.

Both Badr and Abdul Aziz announced they intended to run for the upcoming parliamentary elections. Leading young figures that once stood on the same side of the road are now poles apart, as Abdul Aziz is a member of the Popular Current party founded by Sabbahi.

On the other hand, Tamarod had announced its goals to bring back the unachieved demands of the 25 January Revolution and end the polarisation and disputes between supporters and opponents of Morsi’s regime.

According to El-Temsah, it failed to do so. “We suffer from an extreme situation of political polarisation,” she said. To her, it is worse than the era of assassinations of the ’70s and ’80s, and even worse than the time of the Muslim Brotherhood, despite her strong opposition to them.

“Today we have sectarian killings, the most dangerous of all. Both sides are inciting against each other, we judge based on identities, affiliations and assumptions,” she stated. El-Temsah was referring to the Brotherhood’s incitement of violence against security officials, and also the state’s incitement against political activists.

On a further note, the common demand of 25 January and 30 June was the elimination of corruption, which continues to be widespread in all state institutions. “And even among us as citizens. We have not changed, we have not done anything differently,” El-Temsah said.

“Unfortunately, what happened on 25 January and 30 June cannot be referred to as a revolution, which in concept comes with a change in our ideas and beliefs,” she added.

El-Temsah preferred to call it an uprising without a firm single leader, rather coming from disorganised popular movements sharing frustrated feelings of oppression and poverty, leading to separation and conflicts over power acquisition.

“A revolution means a full change of the society. It is based ona number of demands made by the people, the simple grassroots population, hoping to achieve them. The Egyptian people are pleased with the minimum but a revolution happens when an entire regime is destructed,” she said.

In conclusion, El-Temsah stressed on the precise aim of a revolution, which she differentiates from the fall of the state. “The revolution aims at getting rid of a corrupt regime, with all its components, from president to ministers and so on, because when you keep the remains of a corrupt regime, they work against what the next one hopes to build,” she said.

The memory of 30 June uprising through people’s eyes