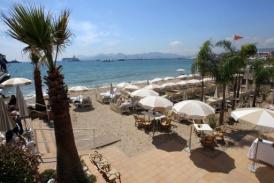 The General Authority for Tourism Development’s (GATD) Board has agreed to extend to the beginning of 2016 the regularisation delay for Ras Sedr projects violating terms of the technical accreditation. A total of $5 per sqm will be charged, according to a GATD official.

The purpose of the delay is to speed up construction operations in the area after four hard years for the tourism sector, the official said. He added that this has led to a lag in real estate investment in Ras Sedr in particular.

The benefiters of this delay are those who violated the terms of technical accreditation that were provided to investors, the official said. The official explained that the authority allocates lands to investors according to specific conditions for construction and a specific number of hotel rooms and tourist housing units.

South Sinai’s tourism decline led investors to violate the terms of the technical accreditation in the contract involving the number of hotel rooms per project, and gives priority to investment in tourist and housing units.

According to the terms of technical accreditation investors are bound by, hotel rooms cannot be less than 50 per project, which was violated by many companies. This has led the authority to work on finding a solution for the problem, according to the official.

The Ras Sedr area includes seven sectors that include 59 projects on an area of 25.9, sqm, according to the official, who added that the number of tourist housing units exceeds 15,000, with 50% of them under construction.

Saad greatly believes in the importance of the establishment of the Ras Sedr airport as the most important facility of the infrastructure. He said that it will lead to a direct increase in the area’s tourism flow, and shorten the operations of transporting tourists from Sharm El-Sheikh and Cairo.

The development plan includes the establishment of Ras Sedr airport on an area of 20m sqm. This comes in addition to connecting the area of Ras Malaab on the east cost of the Gulf of Suez with a marina on the western shore in the area of Ain Sokhna.

Aly Rabie, Chairman of Abraj Misr, told Daily News Egypt in a previous press statement, that his company plans to inject EGP 2.5bn into the establishment of two marinas on the eastern and western coasts of the Gulf of Suez.

Saad believes that accommodation units are of the most important tourism pillars in Ain Sokhna and Ras Sedr. There must be rules and regulations to manage them in a way that increases Egypt’s competitiveness in the future, and attracts tourists from the Gulf, adding that this kind of investments requires new legislative and administrative regulations.