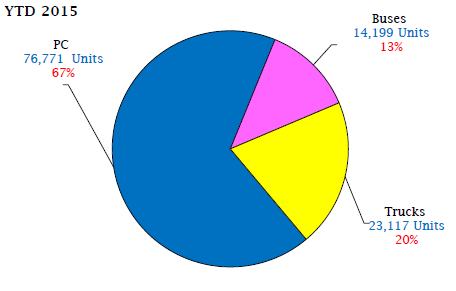 Car sales declined last May, registering a decrease of 14% in comparison to the same month last year, according to the Automotive Marketing Information Council (AMIC).

Estimated sales in May 2015 were at 20,152 cars, compared to 23,566 cars, according to sales statistics approved by the agents and members of AMIC.

This decline is the second recorded this year, after sales in April registered a decrease of around 3%, through selling 21,700 units compared to 22,400 during the same period a year earlier.

The total registered sales during the first five months of the current year increased by 4.8% in comparison to the same period last year, where 114,000 cars were sold in comparison to 108,800 between the start of January to the end of May 2014.

The trucks market stabilised during the current year, where 8,000 imported units were sold, compared to 6,900 last year, an increase of 18.2%.

However, the sales of the locally-assembled trucks increased, recording 6,000 sold units compared to 5,000 last year, an increase of 18.4%.