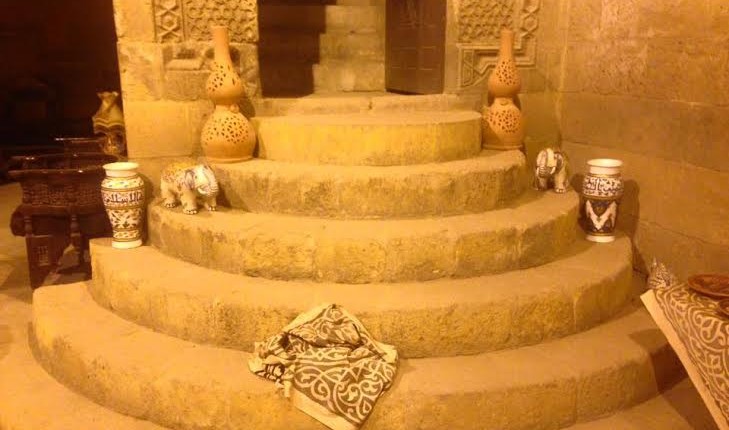 Batn El-Bakara, in the heart of Cairo, is where men spend their days performing magic on standard mud. Each time the tray turns, their tender touches shape all sorts of artefacts. But with technology changing everything, some crafts are improved whilst others are demolished. The pottery craft and market in Egypt has ceased to be a national micro industry, and Batn El-Bakara remains forgotten.

“Batn El-Bakara turned into a gloomy place and the pottery makers were jobless. Enactus British University in Egypt (BUE) has seen the enviable chance to revive the place and give it back its glory,” said Ibram Azab, team leader.

A team of 10 university students took the initiative of listening to the residents’ demands, and worked on returning the area to its former glory. The area’s main problem was the craftsmen’s outdated techniques that limited the quality and creativity of their outcome.

Professional training was inevitable in order to introduce Batn El-Bakara to the new century with all of its demanding technicalities.

“The first phase took about 50 days, pottery makers regained their gifts in producing pottery but way better than they used to. After the training they were able to produce magnificent products with unique designs. This was arranged in 20 effective workshops that produced modern products,” said Azab.

After completing phase one, the participating residents, who were mainly men between the ages of 25 and 45, had to face a bigger challenge. While they were all essentially gifted with the craft itself, marketing their final products was never their point of strength.

The Enactus team initiated phase two right away, as their vision was not only about improving the outcomes, but also about a full business cycle including marketing and sales.

“Galleries and shops became part of the project. Their role was to sell the residents’ products. Despite the difficulty, the team helped pottery makers to have a sustainable market for their production lines with high prices that gratify the hard work of the pottery makers,” said Azab.

According to Azab, the difficulty in phase two was the geographical element along other logistic factors, as the galleries and shops were sought and chosen according to demographic dimensions.

Before officially launching the project the team aimed to spread the news and help the residents reach a wide audience. Their third phase included media and online marketing.

“In order for any entrepreneurial business to succeed, marketing is always the key to refresh the flow of sales and brand positioning,” Azab explained.

Their media campaign involved several interviews that included the craftsmen themselves along with their products. The team also helped creating a wide spread on various social-media platforms to market the new face of Batn El-Bakara, “Fokhar City”.

“Many people were attracted to the project and even asked to get trained in the district after it has evolved to work on a very high scale,” said Azab. Such feedback did not only prove the project’s success, it also revealed that it was the right time to officially introduce Batn El-Bakara as a local attraction.

Last week, an invitation was extended for people to visit “Fokhar City”, the new pottery haven, after the recent renovations. The event included entertainment plus a workshop where the newly trained craftsmen taught the crowd basic pottery techniques.

Today, “Fokhar City” is open to anyone who wishes to witness the craftsmen in action, buy their artistic products and even learn a thing or two about this national craft.

Enactus is a worldwide non-profit organisation powered by university students, who implement developing projects in areas that require smart solutions to improve the residents’ standard of living. Each project should acquire three common factors set by the organization worldwide; economic, environmental, and social impact.

The NGO is present in more than 36 countries around the world and 40 universities in Egypt. Every year, each country holds a national competition that qualifies a winning team for the world cup. Last year, Enactus BUE managed to gain fifth place in the world cup after winning at the nationals.