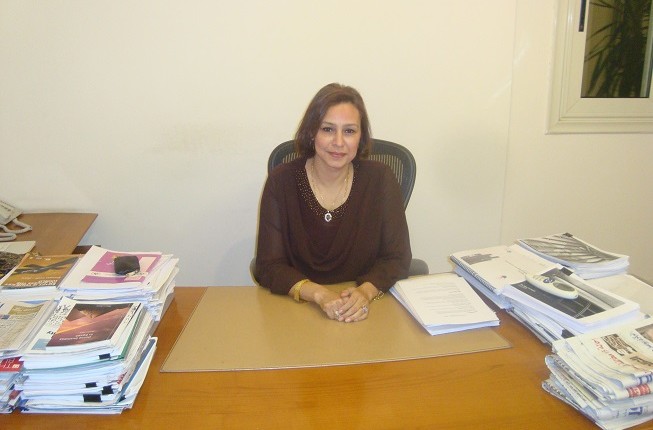 In an exclusive interview with Daily News Egypt, MEATCO chairperson Dalia Ezz Eldin talks about the company’s fate and the status of the legal disputes between the company and businessman Karim Naggar. These differences and disputes led to Naggar’s dismissal from his position as chairman of the Egyptian Automotive and Trading Company (EATC), which is the Volkswagen and Audi agent in Egypt.

Ezz Eldin, who is also a senior partner in the EATC, the circumstances behind the dispute and her company’s stance on the Egyptian market and those who work in it, and if it is true that there are negotiations for reconciliation.

Before talking about the disputes and their reasons, what is MEATCO? What is its activity?

MEATCO is an Egyptian joint-stock company, established in the country under the name of “Middle East and Africa Trading Company” (MEATCO).

It is said that this company is Lebanese, that it wants to buy the EATC, and that it has nothing to do with the automotive sector. What is your response to these rumours?

This is totally false; MEATCO is an Egyptian joint-stock company, where 99% of the shareholders are Egyptian, and the remaining 1% is a foreign partner. This is the truth about the company. It is not a Lebanese company. We also work in many commercial and investment activities, in fields that vary from construction to direct investments in commercial and industrial projects.

It is said that there is a family dispute between you and businessman Karim Naggar over the EATC?

I want to clarify that Karim Naggar is not related to the Kettaneh family at all, contrary to what’s being said in the Egyptian market that he is a member of the family, this is not true.  Another fact is that he is not the sole owner of the EATC, in fact he now only owns 10%, and the rest is distributed amongst the different shareholders. The disputes between Naggar and the shareholders came as a result of an administrative and financial disagreement that was revealed, this is what led to his dismissal by the general assembly of the company. The general assembly’s decision was adopted by the General Authority for Investment and Free Zones (GAFI).

I would also like to clarify that Karim Naggar was chairman of MEATCO since its establishment until the dispute with the company’s shareholders, which forced him to resign. The strange thing is that he claims we are not Egyptian, although he knows really well that this is not true.

What is the Kettaneh group? Why has its name frequently been repeated lately?

The Kettaneh group is a Lebanese group, and Nabil Kettaneh is only a 1% shareholder at MEATCO, as I said before. The Kettaneh family is one of the biggest families in Lebanon, with businesses in many fields and investment activities, the most prominent of which is the Volkswagen and Audi agency in Lebanon. The family also has various companies in the fields of real estate development and construction, and an agency for food companies, and many other companies in Lebanon, Jordan, Saudi Arabia, Iran, and some European countries. They also have many investments in Egypt that go back to sixty years ago – meaning they do not look at the Egyptian market as a life saver as alleged by some. The truth is, the Egyptian market represents only 10% of the group’s huge investments in different fields.

How do you perceive the EATC now? And in case the dispute would be settled in your favour, what is your future vision?

First of all, I would like to assure that we are not with or against anybody, and that we do not intend to close the company and laying-off the labourers, as Naggar said to different newspapers. He claims that we intend to lay-off around 650 workers. All of these claims are completely untrue.

In fact, if the dispute would be settled in our favour, no workers will be laid-off. On the contrary, there is a plan to increase the number of workers to more than 1,000 employees as a first phase, where we intend to increase the number of service centres and retail branches. We plan also to focus on providing the original spare parts needed for the customers who suffered from the poor performance in the last period. Moreover, we have development plans for the sales systems, and providing the insurance and instalment services, in addition to a lot of ideas that meet the level of Egyptian consumer and the both signs of Volkswagen and Audi.

What is the reason behind ending the good years between you and Naggar, and what are the most prominent financial mistakes he made that led him out?

The dispute erupted with Naggar for several objective factors, most important of which is the budgets he presented in 2010, showing that the sales of some competitor cars of Audi in the markets. For instance, the sales of the imported models of Mercedes has reached 2,000 cars, the imported models of BMW has reached 1,210 cars. On the other hand, Audi, which is the world’s bestseller brand in the category of luxury cars, registered only 499 cars in 2014.

The disputes started in 2009 over the poor performance of the company, and the clear manipulation in the profit. The 2010 budget registered EGP 694m sales, while the profit was just EGP 4m, meaning that it was less than 1%. In the budget of 2012, the sales were EGP 635m, and the profit was just EGP 5m. Moreover, the management was poor, which allowed the competitor companies to expand and grow, and shrank the market share of Volkswagen and Audi. As a result, the demands of changing the management and stop the very poor performance of the company’s sales started to increase. The sales issue was clear; the company did not exceed 3,628 Volkswagen, while the nearest competitor’s sales volume exceeded 5,000 cars. The deterioration of the sales volume continued until it reached 1,970 cars by the end of 2014. The situation of Audi was not a lot different, but worse, where its sales volume did not exceed 600 cars between 2009 until 2014. Of course this poor performance intensified the dispute.

Are the low sales the major reason behind the dispute? Are there other reasons?

Of course, the issue of the low sales was the most significant problem. The most effective, perhaps, wa the bad reputation of the product in Egypt, and the declining profit in spite of the paid investments volume. Is it rational that the annual profit of the agent of brands as big as Volkswagen and Audi does not exceed EGP 6m?

Through these problems, we demanded more than once to change a lot of the systems in the company, and create new ideas due to the advanced system in the fields of customer service, and human development to attract the competencies and maintain them. That is in addition to our insisting on finishing the issue of local assembling for Volkswagen and Audi models that are not listed under the tariff cuts decided in the EU-Egypt Association Agreement, as they are not manufactured in Europe. However, Naggar refused this, which created distrust within the board of directors.

It was said that you refused to increase the capital to establish new centres and showrooms?

This is not true. In spite of the bad situation of the company, and our dissatisfaction, as a major contributor, with the performance of the company in comparison to the other similar companies, we agreed in 2013 on the subscription in capital increase. EGP 49m were pumped by the shareholders under the command of Naggar, although he did not present any thorough studies for the expansion idea, which intensified the dispute.

Karim Naggar affirmed that he still owns the bigger shares of the company and more than 65% of EATC, is that true?

This is not true at all. After Naggar tried to trade the shares for personal reasons and breached the contract with the Volkswagen and Audi agency. Shares are distributed roughly as follows: Karim Naggar 10%, Mai Mourad 8%, Jihan and Miral Naggar 1%, MEATCO 42.5%, and Engy Faltas 38.5%.

What is the reason behind raising the dispute with GAFI?

These percentages are real, and they reveal the current situation of the company. The dispute which was raised to GAFI was a result of financial manipulations by the financial management of our company, which led us to discuss the matter with GAFI to inspect the files. The authority did find some manipulations done by Naggar during his management. GAFI thus requested the formation of a general assembly to look into dismissing Naggar.

Why did it take so long between investigating the case and issuing a decision in April 2015?

We know that some people believe that we plotted with GAFI against the company, and that the authority helped us take this decision, which is of course not true. The truth behind the postponement of the decision was that GAFI was trying to grant us another chance to resolve the conflict. Indeed we held partner meetings with the committee of resolving conflicts and disputes at GAFI. The attempts, however, were unsuccessful because we could not reach a solution, and this took us six months, while all legal procedures were suspended.

Was there a decision for one of the partners to purchase shares of another, and to acquire all the stocks?

At the start of the partner meetings, an idea to sell and evaluate the company was indeed proposed, and Naggar was the one demanding this during the meetings. We did agree to do a full evaluation for the company. One of the well-known companies evaluated our company, and after we set the price we discovered that there have been new manipulations by Naggar in the evaluation. This pushed us to reject it and resort to GAFI to continue with the procedures which were started already. The authority approved the general assembly’s report and dismissed Naggar.

What about Naggar’s negotiations with you for resolving the conflict and purchasing the company?

This is absolutely not true. We stopped negotiations months ago, and there are no current negotiations for purchase of selling. The matter is now in the hands of the Egyptian judicial system, and we put our full trust in it to give us back our full rights.

Did some businessmen attempted to purchase the company?

I do not know about these businessmen. However, I heard about it and I assure you that no one can purchase the agency, since the agency’s partners themselves are in conflict, so there is no way anyone else would buy it. Also, the company in Germany would not agree to hand the agency to anyone else who does not belong to Volkswagen International or has not previously worked with them.

What is Germany’s situation in this dispute? Do they know all of this?

Of course they know everything regarding the dispute. They also know about the legal situation of the company right now, and they are completely dissatisfied with Naggar’s actions when he sold stocks of the company to other members outside of shareholders, and when he breached one of the most important conditions of the contract. The contract stipulates that no one has the right to sell the company’s stocks or add a new partner without the approval of the German company.