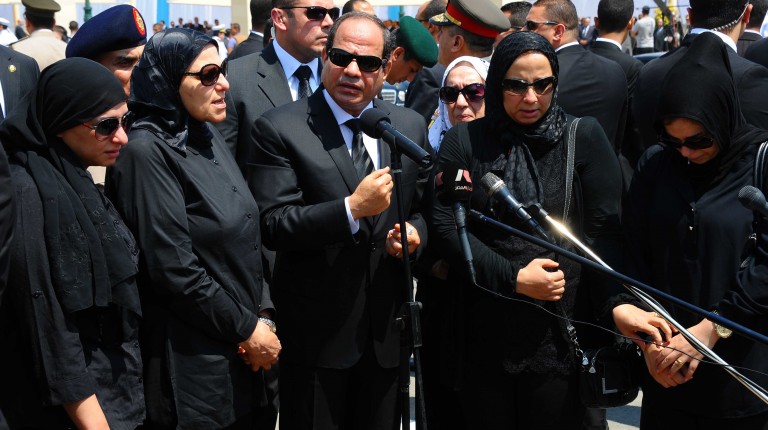 While the lion’s share of attention has been focused on the articles related to press freedom in the proposed anti-terrorism law, the articles that propose amendments to the judicial system in Egypt did not pass uncritcised.

The amendments to a draft law that was in progress were expedited following the incidents of the assassination of Prosecutor General on 29 June and large scale attacks on army checkpoints in North Sinai last week.

President Abdel Fattah Al-Sisi made comments the day after Barakat’s assassination saying “effective justice is restricted by laws; we will amend laws to achieve justice as soon as possible”.

Articles 48, 50, 51 and 52 of the draft law were under the spotlight for human rights NGOs, as they fear an “exceptional judicial system that undermines guarantees for a fair trial”.

“The law draft establishes a special court to hear terrorism cases and institutes an exceptional judicial regime governing these trials and the methods of appeal,” a joint statement from 17 organisations read.

The group of NGOs, that includes leading rights organisations such as the Cairo Institute for Human Rights Studies (CIHRS), the Egyptian Initiative for Personal Rights (EIPR), and the Association for Freedom of Thought and Expression (AFTE) among others, believes that the proposed amendments to trial procedures “gravely infringe the right to a fair trial and guarantees for self-defence”.

Article 48 of the law creates a new court designated for the crimes and misdemeanours related to terrorism, to be instructed to speed up the trials.

Article 50 reads “with the exception of article 388 of the criminal procedures code, a verdict in any of the cases enlisted in this law is considered in the presence of defendant, if a proctor was present and presented a defense”.

The NGOs criticised the provision, saying it would permit courts to appoint lawyers for absentee defendants without their consent and deprive them of one stage of litigation.

“Article 51 establishes another exception by reducing the period in which a judgment in terrorist crimes can be appealed from 60 to 40 days. This is yet another infringement of the right to defense,” they added.

The Arabic Network for Human Rights Information (ANHRI) also issued a report to comment on the draft law, saying “the belittling of established legal and constitutional values is the main feature of the law.”

The organisation highlighted the absence of dialogue with parties or NGOs on the law before its issuance, pointing also at the president being the legislator amid the repeated postponement of the parliamentary elections.

Under Article 52 of the draft, a defendant can appeal before the Court of Cassation only once, at which point the court will rule on the merits of the case. The article, according to ANHRI, represents an assault on one of the guarantees of a fair trial and citizens’ rights to the normal degrees of judicial ruling.

“This law should not pass,” the rights organisation concluded.