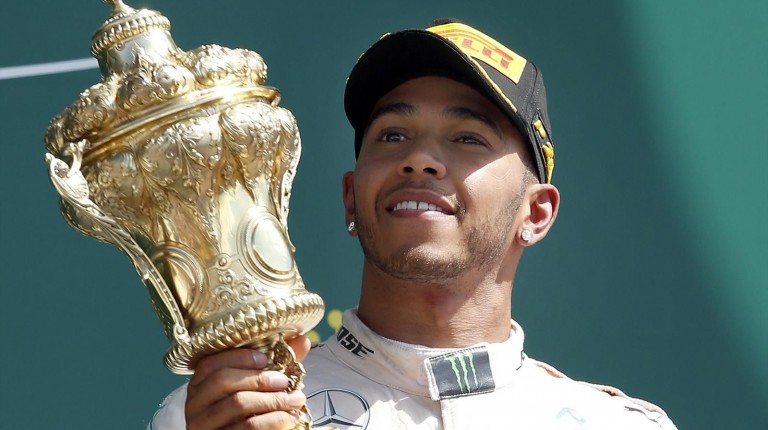 British racing champion Lewis Hamilton won the British Grand Prix at the Silverstone racetrack, driving for Mercedes. The race was the 9th round of the Formula One World Drivers’ Championship (WDC), and is the eighth title win of this year’s competition for Mercedes as well as being the fifth title win for Hamilton.

Hamilton went from first place to second after the Williams team drivers made a significant start. Despite several stops at the start and heavy rains in the final phases of the race, Hamilton managed to regain his place.

The British Grand Prix marks Hamilton’s 38th victory throughout his career and his third win on home soil. At the end of the race, he extended his lead over teammate Nico Rosberg by more than 10 seconds.

On the other hand, Germany’s Vettel Sebastian took advantage of the rainfall, when he changed tyres to adjust to the weather, thereby advancing to third place in the final rounds. Since Monaco’s race, this was the first time Sebastian was able to ascend the podium.

At the start of the race, the Williams team was ahead of the game, even though they took fourth and fifth places in the end, thanks to Brazilian race driver Felipe Massa and Finnish race driver Bottas Valtteri.  Some say the Williams team took the wrong decision to delay changing tyres to adjust to the rain.

Meanwhile, Russian racer Daniil Kvyat took sixth place, winning over Germany’s Nico Hülkenberg, who gained seventh place. Finnish driver KimiRäikkönen unfortunately went down from fourth position to the sixth, after changing his tyres early in the race before the rain, which wasted a lot of time.

Ninth place was taken by Mexican Sergio Pérez, while Spanish Fernando Alonso came in tenth and collected his first points this season.