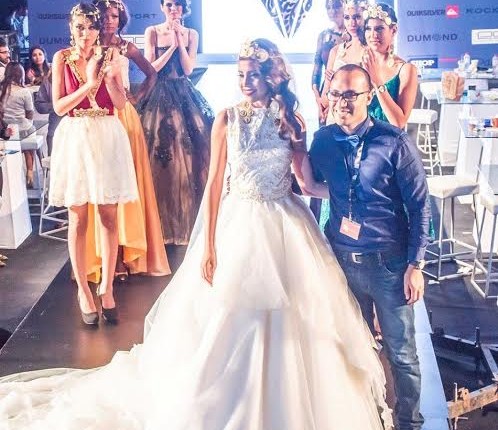 In a conservative community like Egypt, letting your son attend tailoring classes or express an interest in fashion is by no means the norm. While an uncountable number of designers and bloggers emerges every day, only a very few men are joining the movement, especially those who design for women.

In contrast to the long French history of couturiers, the present and future local scenes do not promise equal male presence. While Lebanon’s couture legacy is currently being written solely by men, notably through Elie Saab, Zuhair Murad, and George Shakra, Egyptian men remain unusual in fashion.

Such a gap between genders raises a question of whether this phenomenon is a result of the community’s stereotypes, or whether it is caused by the costumers who prefer dealing with women instead.

Ahmed Saédi is one of the very few promising local couturiers. He originally studied computer science with a diploma in information systems, but once he listened to his heart, he knew this was not the right career for him.

“One of my friends suggested starting a fashion business, since he knew that I was slightly interested in fashion. His idea was to import garments and resell them to the Egyptian market. But I wanted to create something new. Therefore, we started Plush,” said Saédi.

Plush was based on the idea of altering and improving existing designs. However, soon after his first collection, Saédi felt the need to design his dresses from scratch, and accordingly he started taking short courses.

“After my friend left the country, I started my own brand, Maison Saédi. Now I make sure to design and create everything personally,” said Saédi.

Saédi admits that being a man in this industry is quite difficult, especially at the very beginning. “Women tend to prefer dealing with other women. I always felt that the culture itself encourages women to become designers, which adds a certain burden upon upcoming male designers,” said Saédi.

According to Saédi, one of the most uncomfortable phases for local women is the fitting. As a few of his close female friends confirmed to him, they usually dislike going through the process with male designers.

He is currently working on his haute couture collection debuting next February. Meanwhile, the design enthusiast is also planning on expanding his horizons, by adding a jewellery line to his portfolio.

“I want to create male accessories and jewellery, from bags to belts and cufflinks. All of my products are made in Egypt completely and I would love to preserve this local essence which is related to our culture and heritage,” concluded Saédi.

Omar Madkour is certainly a fashion entrepreneur. In addition to his casual line of clothes, “Ultimate Fashion Wear”, Madkour started the current wave of multi-designer shows to harbour young talents.

“Back in 2012, Egypt did not have the current number of fashion events. At the time, only prominent designers such as Hany El-Behairy were able to implement and afford runway shows,” said Madkour.

Madkour’s vision was very simple, to create a platform for young local designers in order to give them a sufficient push at the very beginning of their careers. Cairo Fashion Festival (CFF) has managed to introduce several names to the local market. Today, after four successful seasons, many of the designers who started at CFF are independently successful and well-known.

“Fashion is my full-time job; I have never worked in a corporate. Instead, I started my own company, Ultimate Fashion Wear, right after graduating from college because I see great potential in this industry and I believe in its power,” said Madkour.

Madkour’s job might revolve around fashion as well, but it is quite different from couturiers as he does not have to deal personally with female costumers.

“Being a man in this industry is neither an edge nor a burden. It did cause problems in one or two cases, but working with women is never bad,” said Madkour.

Madkour is currently focusing on his two companies, CFF and Ultimate Fashion Wear. He plans on invading the world of fashion corporate events with CFF, whilst also capitalising on the company’s lifestyle events with more openings.

The entrepreneur aims to target international markets with his casual brand.

“Our products are 100% Egyptian and the entire manufacturing process is done here as well. In the coming period we will expand in products and address international retailers,” said Madkour.

Ahmed Azzam is an artist with an unexpected job in Egypt – he is a bag designer. Azzam has always had an on-and-off relationship with fashion, as he started several temporary projects at an early age only to quit the whole business after feeling unsatisfied.

“In 2012, I decided to get back to the fashion field once again but first I scanned the market to identify its needs and to be aware of where did the industry stand,” Azzam explained. “I found a couple of fields that suffered from major gaps; but, I decided to start with bags.”

The designer’s personal experience introduces the other face of the coin. The avant-garde designer has never felt neither special treatment nor prejudice. “Maybe it is not common in Egypt to have male designers. But so far I did not face any significant problems; as a matter of fact I feel ladies are happy having a man that understands their needs,” said Azzam.

After the brand’s revolutionary interpretation of florals last spring, ZAAM is set to introduce ZAAM signature bag next summer. The designer has also set his eyes on the men’s world as he will be creating a new collection for them.