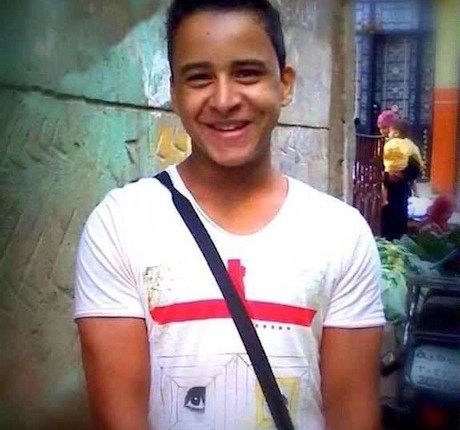 A teenage boy has had his period of pre-trial detention extended for another 45 days by a Cairo court Saturday, in a case that centres on a political t-shirt worn by the student. The renewal will take his total time in detention without trial to almost 580 days.

Mahmoud Mohamed Hussein, 19, was wearing a t-shirt that read ‘A nation without torture’ on the third anniversary of the 25 January Revolution. He was arrested on his way home from a protest against military rule and the Muslim Brotherhood, and has yet to be charged or tried for any offences.

According to Mahmoud Hussein’s brother Tarek, the trial has been delayed more than 24 times, with each delay averaging about five to seven days, “which indicates that more than half the time of the detention is due to a direct instruction from the Interior Ministry”, he told Daily News Egypt after the last renewal. “This is unconstitutional,” he added.

Mahmoud Hussein’s defence lawyer, Mokhtar Mounir, who works with the Association for Freedom of Thought and Expression, previously told Daily News Egypt: “After the latest legislative amendments passed by the cabinet, now the number of days in which a person can be held in detention before a trial is unlimited, which is unconstitutional. The changes are being abused and used as a tool to harass opposition in society,” Mounir said. Hussein’s case has been picked up by activists and rights groups internationally, with prominent NGO Amnesty International also having campaigned on his case.

Amnesty has called on President Abdel-Fattah Al-Sisi and the Egyptian authorities to “release prisoner of conscience Mahmoud Hussein immediately and unconditionally and for all charges against him to be dropped, as he is detained solely for exercising his right to freedom of expression and assembly”.

“Mahmoud Hussein is one of many in Egypt’s prisons that are being held for months without charge or trial under renewable detention orders. But, Egypt is a signatory to the International Covenant on Civil and Political Rights, which guarantees the right to freedom of expression and assembly,” the NGO said in a petition to the Egyptian government.

Pre-trial detention is a controversial process in the Egyptian legal system, and has been frequently criticised by rights group as a tool to pressure anti-government activists to confess to alleged crimes.