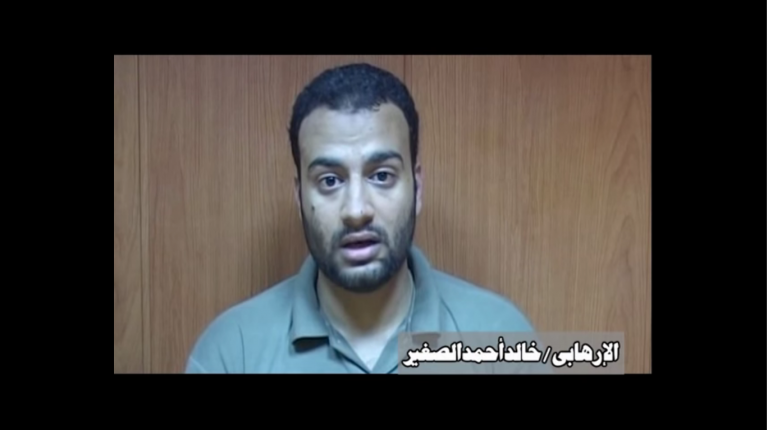 A number of individuals who were part of a wave of disappearances in recent months have appeared in a video published online by the Ministry of Defence. The video, released Friday, claims to show the individuals confessing to membership of a terrorist network and claiming responsibility for attacks on state facilities and personnel.

The 11-minute video, entitled “The arrest of the largest terrorist cell that threatens national security”, claims the individuals were trained abroad on Muslim Brotherhood instruction. It also claims they have attacked state facilities, including police cars and electricity pylons in Egypt.

A ministry press release states that the operation was “part of a strategic plan by Egypt’s security services to detect terrorist organisations that aim to destabilise the country, the economy and national security”.

The release says the cell is run from Turkey by the “terrorist Muslim Brotherhood and organisations loyal to it, and members received training in Syria” on assassinations, kidnappings and the manufacture of explosive charges. The video names the leader abroad as a 23-year-old man called Abdullah Nour Eddin Ibrahim Moussa.

The alleged local leader of the group is a 25-year-old man named Ahmed Amin Ghazali. In a statement to the camera, Ghazali says he ran the cell in Egypt and had previously undertaken attacks including torching police cars.

Ghazali continues that he plotted to take youth outside of Egypt for training with the Syrian rebel group Aknaf Bait Al-Maqdis, on the orders of the international organisation of the Muslim Brotherhood. He said the Muslim Brotherhood instructed operational groups to undertake attacks in the country and organise training abroad.

Aknaf Beit Al-Maqdis are a rebel group from the Palestinian refugee camp of Yarmouk in Syria, and are loyal to Hamas. However, the group reportedly collapsed earlier this year during battles with Islamic State and Al-Nusra Front.

Revolutionary and pro-democracy activist Mona Seif reported on Facebook that six of the men featured in the video, including Ghazali, were abducted in a wave of disappearances in recent months.
The disappearances saw numerous individuals, with connections to revolutionary or Islamist politics, taken illegally by security forces. Some of the disappeared individuals have appeared on charges of belonging to an illegal organisation and unlawfully calling for protests before prosecution, other have reported severe physical abuse.

Seif and other activists are questioning the sincerity of the ‘confessions’, and suggest that the statements may have been expressed under duress.

Also amongst those speaking to the camera in the video is 22-year-old Sohaib Saad Mohamed Al-Haddad. The student is one of five facing trial in the Al Jazeera case (also called the ‘Marriot cell’), charged with conspiring with the Qatari media network’s journalists. The defendants maintain they have no relationships with anyone from the outlet.

Al-Haddad was released earlier this year as the case began to fall apart. However, on 1 June, he was dining in Maadi with friends, Esraa El-Taweel and Omar Ali, when all three were forcibly disappeared.  El-Taweel, who is a photojournalist, appeared in Qanater women’s prison where she faces charges of spreading false news. Omar Ali, also accused in Friday’s video, was reportedly taken to Al-Aqrab prison. Al-Haddad appeared in Tora prison.

Haddad tells the camera that as part of his work he purchased a weapon that was given to another member to assassinate a police officer involved in the dispersal of the Rabaa Al-Adaweya sit-in in August 2013.

Writing on Facebook after the video’s appearance, Al-Haddad’s brother Osama said: “Sohaib was kidnapped and forcibly disappeared for two weeks. Then he appeared in Tora prison. During the time of his forced disappearance he was hung by his wrists for three full days and electrocuted all over his body. He said that he was tortured to the extent that he lost the ability to scream or faint.”

Al-Haddad’s brother also called in to question the plausibility of the video’s claims. He wrote: “Sohaib was arrested on 2 January 2014 as part of the Marriot cell case and was held until his release in February 2015.  They released him on bail on the conditions of the police checking upon him daily. Sohaib was imprisoned for one year and two months…he was kidnapped 1 July 2015 – when could he have undertaken these terrorist acts?”

Egypt’s judicial system has frequently been called in to question, including over the absence of substantial supporting evidence for guilty claims. In May, six men accused of being part of the ‘Arab Sharkas’ militant cell were executed. Prominent international NGO Human Rights Watch said that although there was evidence to prove that three of the defendants were detained at the time the crimes were carried out, they were still charged and convicted.