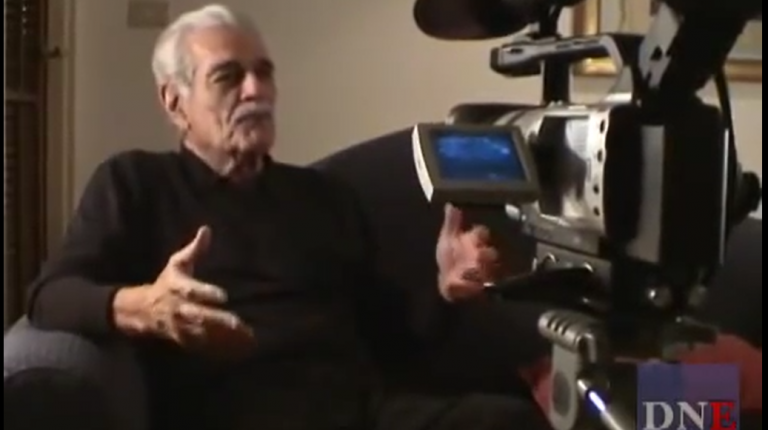 Award-winning Egyptian icon Omar Sharif passed away Friday morning at the age of 83, leaving behind millions of loving fans and friends mourning the loss of the actor.

Sharif, famous for roles in blockbuster films including “Doctor Zhivago” and “Lawrence of Arabia”, had been diagnosed with Alzheimer’s disease. His agent, Steve Kenis, reported to several media press channels that he suffered from a heart attack.

However, the treasures Sharif added to the history of international cinema are still increasing with one film he shot after his retirement.

1001 Inventions, a British based non-profit production organisation, announced the release of a new short film in which Sharif participated. The film, which is the actor’s final performance, is a science fiction film featuring the inventions of Muslim scientist Al-Hassan Ibn Al-Haitham.

“Sharif came out of retirement specifically to do this film, as he strongly believed it would help educate children all over the world,” said Ahmed Salim, the producer and director of the film.

The film shows Ibn Al-Haitham’s journey to understand human vision, and the principles of light and optical theories.

“He worked tirelessly, despite the onset of his failing memory and it’s an honour to all of us to work with him,” Salim said.

The film is partly animated, and shows Sharif as a grandfather who helps his granddaughter with her hard to solve science homework by telling her the story of Ibn Al-Haitham.

It was filmed in London, and is currently at the post-production phase. It will be launched later this year as part of the United Nations proclaimed International Year of Light 2015, and is now dedicated to the memory of the superstar.

“Omar Sharif spent a life-time in the film industry and we hope his final film will define his legacy by helping to educate and inspire young people,” added Salim.

“Most people don’t know that I studied physics before starting my acting career so honouring the scientist Ibn Al-Haitham, the Arab grandfather of the camera obscura – the device that forms the basis of photography and cinematography – is of personal interest to me. I hope this educational film will spark ambition and creativity and will culminate my career with an inspiring message to young people to follow their dreams,” Omar Sharif had previously said, according to the 1001 Inventions organisation.

Sharif’s death comes almost seven months after his former wife and the love of his life, Egyptian diva Faten Hamama, passed away on 17 January at the age of 84. In all of his interviews, Sharif recalled what Hamama represented for him. They had one son, but they divorced in the mid-1970s.

According to an interview with his son Tarek in Spanish newspaper El Mundo last May, Sharif’s health condition had led him to constantly ask about her, forgetting her death.

Aside from his fame in Egyptian cinema, the renowned actor also had starring roles internationally, including in “Lawrence of Arabia” (1962), “Doctor Zhivago” (1965) and “Funny Girl” (1968). He was an Academy Award nominee and received three Golden Globe awards.

In a Facebook post, Barbra Streisand mourned the loss of Sharif by sharing the memories they had together whilst shooting the film “Funny Girl”.

“Omar was my first leading man in the films. He was handsome, sophisticated and charming,” she wrote. “The idea of casting him in “Funny Girl” was considered controversial. Yet somehow, under the direction of William Wyler, the romantic chemistry between Nicky Arnstein and Fanny Brice transcended stereotypes and prejudice.”

Daily News Egypt interviewed Sharif in 2010, in which he discussed his acting career, his thoughts on life, religion and the future. He stated he preferred acting in English, because “you can act still”, unlike with Arabs, Italians and French who move their heads a lot when they speak.

“Now, why should God in His great justice, make somebody born, if they are not going to paradise? It is absurd. The people made it absurd,” he said.

Below is a video interview by Daily News Egypt in which he discusses his career, religion, and future plans.