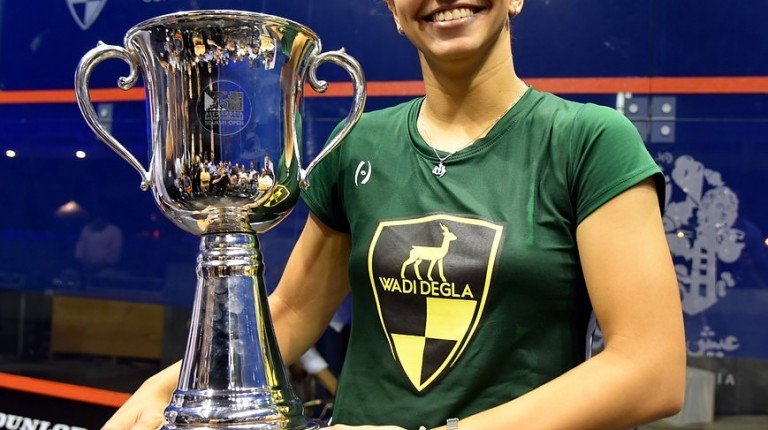 In June, Egypt’s Raneem El-Weleily was crowned first champion of the Alexandria International Squash Open, after beating fellow Egyptian Omneya Abdel Kaawy in the final. The win cemented her place as world no 2, pushing further to claim the game’s top spot.

El-Weleily’s squash career kicked off at the tender age of 12, representing Egypt in the World Juniors 2001, rapidly climbing up the rankings of squash world to retain the second spot behind Malaysia’s Nicol David since 2012.

The Wadi Degla player weighed in on her performance in the Alexandria competition and her expectations for the near future as well as her bid to be Egypt’s first female squash player to hold the world top spot.

Tell us about your experience with the Alexandria International Open

The Alexandria championship was organised in a short time, as it was put on the [international] calendar in May, and it was played in June. For players, it was surprising, as we were all not prepared for it. It was difficult for the players, but it was even more difficult for the organisers. The fact that they managed to organise the championship in such a short notice is a huge achievement. Bibliotheca Alexandrina was a new venue and it was a brilliant idea. As for the competition itself, for me it was one of the hardest I played. I didn’t do well in the British Open a month before the Alexandria championship, as I lost in the quarter final. When I have a bad result my self-confidence is not at its best, so winning the championship for me was an achievement.

You played the final against fellow Egyptian Omneya Abdel Kawy, who eliminated world no 1 Nicol David in the semi-final. Did you want to play against Nicol?

I didn’t feel that my draw was tough, although probably people around me thought it was the toughest. I didn’t think much about it. In the quarter final I played against the winner of British Open and in the final I played against the British Open runner-up. That I eventually didn’t play against Nicol is not something that pleases or annoys me. I played some quality games and it was an achievement for Omneya to beat Nicol in the semi-final and I was happy for her. I was happy that I played against Omneya not Nicol. My performance in the competition was not ideal due to tension and stress as usually playing in Egypt is mentally more challenging than playing abroad. Honestly, until today, I don’t believe that I managed to win with an average performance like that. That I managed to win is thanks to God, and I thank all the people around me; my trainers, family, friends for the support.

Last year you lost the World Open final, did you feel it was the year to clinch the title still missing from Egypt?

The tournament took place here in Wadi Degla and I reached the final and that was my best accomplishment in the world championship so far as I reached the semi-final twice. I played an unforgettablematch, one of the hardest,  against Nicol. I will always remember this match. Yes I lost, but as much as I made mistakes in the match, as much as I learned a lot from the experience. Nicol played amazingly and she was trailing behind, usually you play better when you’re ahead in the game as your confidence grows steadily, and you start to be a bit negative when you’re behind so when she made a comeback to win the game that shows how experienced and strong she is and how much I need to learn. As much as I was disappointed that I lost, I was happy that I learnt a lot.

When will you take over the top spot from Nicol?

We are very close in the ranking, so if I skipped her in the upcoming period it will be just the points’ math, not that I won against her, and it will still be a very close margin.

Okay, so when will you grab hold on the ranking?

This season I have won Malaysia Open, Tournament of Champions, Chicago tournament [Windy City Open] and Alexandria International, that’s four titles. On the other side, Nicol won almost everything else.

I will grab hold of the top spot when I win the same number of titles when I am consistent for a full season, for instance I have been consistent from January to June to some extent, I lost in the quarter finals of the British Open,  so the ups and downs are still there. However, four titles are okay, but six months are not full season the other half of the season is as important. [Smiles] I’m getting there.

Is Egypt able to win the women individual title of the World Open?