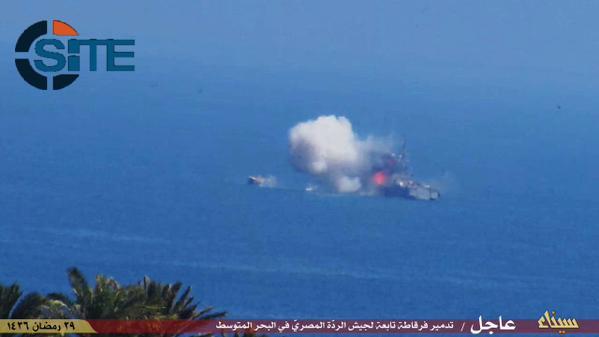 The Sinai-based militant group, “State of Sinai”, has reportedly claimed responsibility Thursday for firing a rocket at an Egyptian naval vessel in the Mediterranean Sea.

The extremist group release photos of the attack, which included rockets being fired at a ship. The authenticity of the photos’ content cannot be verified.

Earlier Thursday, the armed forces spokesperson announced that while a naval ship was guarding the shores in front of the city of Gaza, the forces suspected the presence of some “terrorist elements” and fired at them.

The spokesperson added that the exchange of fire resulted in the boat being set ablaze. “Currently the area is being surveyed to capture the perpetrators,” he added.

This is the first time a security boat has been attacked by unknown assailants.

Last November, the Egyptian armed forces destroyed four “hostile” boats containing what the military referred to as “terrorist elements”, who were purportedly trying to attack a navy boat in Damietta governorate.

One navy boat was set alight, and five navy personnel were injured and taken to a military hospital.