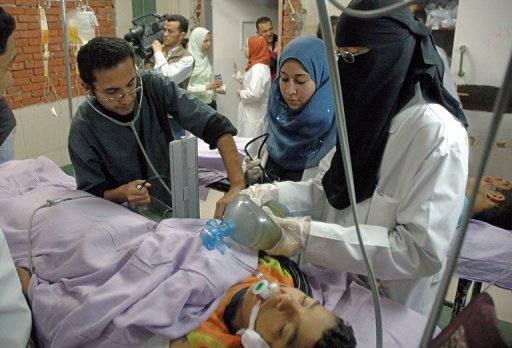 A group of doctors urged President Abdel Fattah Al-Sisi on Sunday to develop Egypt’s healthcare system by drafting new laws to increase infection compensation from EGP 19 per month to EGP 1,000.

They are also seeking to criminalise assaults on healthcare facilities, via their Facebook page, as part of a crowd-sourcing campaign to expose healthcare conditions in Egypt.

On 7 July, the State Council adjourned the verdict in a case filed by the Egyptian Medicine Syndicate (EMS) to October, on raising the amounts of infection compensation to EGP 1,000.

Ahmed Hussein, the EMS’s fund trustee, told Daily News Egypt: “We have been calling for the increase a long time ago, but there should be a political will in order to get it.”

He added: “Even if the verdict approved the increase, unfortunately there is no concrete application.”

According to Hussein, the current amount for infection compensation is illogical. “It was issued in the ‘60s and it is not compliant with today’s working conditions,” he said.

The EMS lawyer who filed the case told Daily News Egypt that he received 30 cases of doctors who have been affected by viruses in the course of their work since late 2014 including one dead. However, Hussein argues that the numbers are far from reality, as many doctors opt not to say they were infected.

Hadeer Mamdouh, a dermatologist at a medical centre supervised by the Ministry of Military Production said: “As a dermatologist, I could get infected by only touching the patient.”

Mamdouh has also been working at the Qasr Al-Eini Hospital, where she received EGP 20 as infection compensation.

“I was not the only one, my other fellows who used to operate on emergency patients received the same amount,” Mamdouh said.

Mahmoud added that doctors are always blamed for any lack of facilities in the hospital, and that hospitals such as Qasr Al-Eini lack beds and facilities for patients. They need more investment than other specialised hospitals, as they serve a wider segment of under-privileged patients.

She explains: “During my work in the emergency room for Qasr Al-Eini, one woman died while delivering her baby. That day her family broke into the hospital and damaged the machines, the glass windows and vandalised everything.”

Similarly, Ahmed Salah, who used to work in a medical centre and is now a residential doctor at Al-Abbasiya hospital for mental health, said: “Infections are a very common occurrence as it could sometimes happen only by getting exposed to a lungs patient’s cough.”

Salah, who works in an independent observatory named Doctors Without Rights, estimated that four or five doctors have recently died due to infection by viruses during their jobs. Hepatitis-C is the most widespread virus among doctors.

A report released by the Egypt Centre for Economic and Social Rights (ECESR) in early June said the amount of governmental expenditures on healthcare in Egypt is 5.4%, which is far less than other countries in Africa, such as Djibouti, which has healthcare expenditures upwards of 14%.

“We are aware that working in private will benefit us more but we choose to work in public hospitals despite worsening conditions,” Mamdouh said. “If we did not step in treating those public hospital patients, nobody else will.”