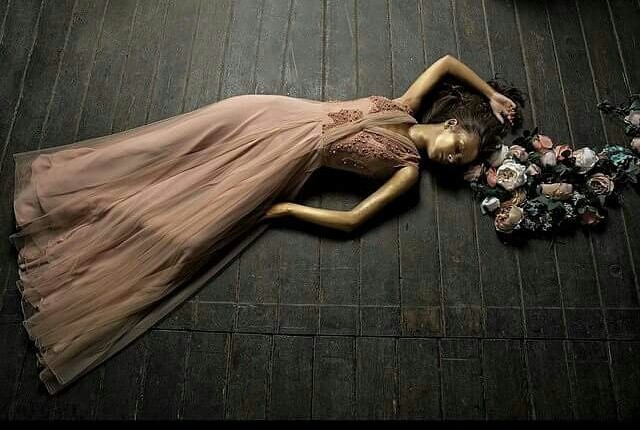 Fabrics, dresses and floral props coming together to create one bigger picture of pure art, “May Showers” is a photoshoot that captured a long-forgotten spring when the city’s toxins would leave room for the flowers to bloom.

Norine Farah and Farah El-Sayed, two artistic souls, met at this colourful fiesta and ever since then, whenever their minds worked together, the world was left to gasp and gaze at the genuine beauty they both create.

While Farah is a promising designer who only started her career one year ago, El-Sayed has been taking Egypt by storm ever since returning from London upon finishing her studies.

Their friendship and key combination of designer-stylist have yielded several magnificent projects, from their breathtaking “May Showers” shoot to a swimwear collection.

The duo is the very first Egyptian experiment of a designer and stylist working closely together. Even though such collaborations are vital worldwide, the novelty of it in Egypt makes them a great incentive for fellow artists to follow their lead.

After finishing their avant-garde collection, the couple intends to work on a new photo-shoot to capture Farah’s latest creations, which are set to be showcased in New York’s Tiffany fashion week.

Daily News Egypt met the two ladies to discuss their daring collection, their collaboration and the common misunderstandings they face.

Collaborating for a fashion show is the highest peak of such a partnership. What did each of you add to that collection?

El-Sayed: The idea started at our first photo-shoot; Nourine just pulled me aside and she was like how about you work with me on the upcoming prêt-à-porter, ready-to-wear, event and I instantly agreed. She had the fabrics and the colours.

Farah: It started with a dress that I made for a client, but the corset was too big for her, so I had to cut it and create another fitting one. The extra corset was bright green and when I looked at it, I decided to add hot pink and on the spot I just decided to make this the direction of the collection. Next, I showed it to Farah and she liked the idea.

El-Sayed: We sat with each other several times to sketch together and choose the fabrics. I am not a designer, so when she used to suggest things, I would stop and contemplate, but when I came to her atelier a day later and saw the final look, I would be amazed by her ability to pick the right colours and fabrics. During our discussions about the models and the show, I suggested wigs and she agreed instantly, then I wanted to add geometric jewellery, because everything was so proportional, and then we both wanted to add denim to make it more fitting to the theme.

This was your first ready-to-wear collection, which is a great shift from couture. How did you work on this evolution?

Farah: It was not easy with swimwear! I bought the swimwear machine four months ago, but I did not do anything because shifting the labour’s mentality is quite difficult.

El-Sayed: Swimwear was a great idea because there are no local designers that specialise in swimwear. I think now there is only one designer. But it is tricky, because the fabrics themselves are difficult to handle and in Egypt the choices are very limited and plain. We got so much feedback on them because they are one-off pieces.

What kind of feedback did you receive, considering the edgy and daring nature of the collection?

El-Sayed: Fashion shows in Egypt are typical, everything is predictable. You can always expect heavily embroidered dresses, lace, the exact technique of slits and silhouettes. So our idea of swimwear was unique and brilliant, especially since summer is around the corner. What got the highest feedback was the purple one with the wig, which was the collection’s core. As for the models, it was very hard to have models who would agree to wear swimwear on the runway, as we were limited to seven to 12 models.

Farah: We tried to cover it up with the denim cape and the denim skirts. We tried to implement the image we had in mind, but in Egypt that is very difficult because people would look at the model not the swimsuit in contrast to fashion weeks abroad.

What is the importance of designers and stylists working hand in hand?

Farah: I can style my own shoot, but it is always better to take advice from a professional, someone who has more knowledge, because the way she looks at things is different from the way I would look at them. It goes for everything else, not only stylists, as I am not a super human. I know my job very well but not necessarily everything else.

El-Sayed: Designers and stylists go hand-in-hand, as abroad each designer has stylist best friends. Alexander McQueen was friends with Katy England, they used to walk together through the entire designing process, because he would design something out of a place he visited or a dream he had. He would design the collection then she would step in and put everything together and they both create a fashion show. The reason people are talking about our collaboration in the fashion show is because we, Egyptians, never have such collaborations in events. To the majority this is not a shoot, so why is a stylist involved.

Where do each of your roles start and end?

Farah: My job starts with designing the theme of my collection and knowing the target audience, and actually creating the collection. It stops at the moment I want a photo-shoot, or something tangible for the audience to view. That is when her job starts, afterwards I can give my opinion, but I cannot hold her back, because she is the professional, and I should not interfere with what she is doing unless I do not like something.

El-Sayed: With her designs, I sit with her after the designing process. I understand where she is coming from and we sit together to figure out the identity of the collection. Therefore, I think this is the point when we either click or do not. So my job starts with understanding her work and inspiration, then next I introduce three different concepts of the way I perceive the collection. The way that clicks the most is the way we work with. I might notice something that she does not see and vice versa, but in our case we have established a friendship more than a business partnership, which helps us understand each other and have the same picture in mind. With her it is not strict, it is not like you do this and I will do that. We work together hand in hand simultaneously.

What is the main importance of trusting the stylist with your collection?

Farah: Whenever I want something extra and she says no, I consider it a final decision, because to me, I trust that she understands her job much more than I do. Accordingly, I do not need to push anything.

El-Sayed: In some cases I have to do what the designer wants, because they insist on it. But normally, I set a deal with the designer to let me do it my way as an experiment and promise to follow their idea if they do not like mine. Out of experience, you learn things that make you master your work. You have to show people because they might not fully understand your explanation and they might not be able to imagine the final image.

How does each of you define her job?

Farah: Creating not imitating. You can have an inspiration, you can like something and recreate it, but not imitate it as it is. You can like something from the ‘70s and recreate it and build on it, but you cannot take a picture from someone else and do it again, even if you change the colour, cut or material but you cannot look at both of them and see how identical they are. The word designer comes from designing.

El-Sayed: Beautifying and taking that creation and making it somehow different from how it was. My best work is when I take something that does not look like it has the ability to be different and I go out of the box completely. I can take the same dress and target a seven-year-old or an 80-year-old – that is how fixable my work is. A good stylist would take a dress that my mum would wear and style it to someone who is 17-years-old and vice versa. It is targeting different people with the same garment.