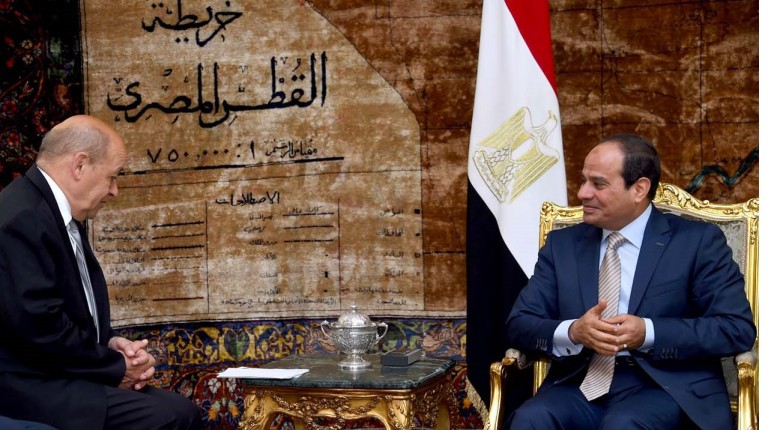 The French Defence Minister Jean-Yves Le Drian began a two-day visit to Cairo Saturday, days after the first delivery of Rafale fighter jets from France in a €5.6bn deal with Egypt.

French media reported ahead of Le Drian’s visit that the talks will cover the deliveries of hardware to Egypt. In February, the two countries signed a multi-billion Euro military hardware deal, which included 24 Rafale jets, a €1bn Frigate vessel and MBDA missiles.

The French minister communicated the intention of French President Francois Hollande to attend the celebration of the inauguration of the new Suez Canal project. President Al-Sisi spoke with Le Drian on the economic opportunities the Suez Canal and North Coast will provide in the near future, in terms of trade and logistics.

Alongside regional security files, the President stressed the importance of a settlement of the Palestinian issue, especially as it is “one of the main arguments used to justify terrorist actions”, the spokesperson of the presidency reported.

Mehleb received Le Drian on Saturday, in a meeting also attended by Sobhi, and stressed the importance of cooperation between the two countries regarding the fight against terrorism and extremism that has struck both countries recently. This comes as part of “concerted international efforts to defeat terrorism”, according to a cabinet press release.

The two ministers welcomed their countries military cooperation and highlighted the opportunities to enhance ties, with Le Drian confirming France’s support for naval training and production in Alexandrian bases. The multi-billion military deal also includes joint manufacturing of three warships in the Egyptian shipbuilding arsenal between the two countries.

The cabinet spokesperson said the meeting also covered illegal immigration, with Mehleb raising the importance of a comprehensive strategy that includes Europe’s support in tackling the roots of the movement. Mehleb emphasised strengthening technical cooperation and vocational training as one area that will help the transfer of French technological expertise and promote opportunities for young people abroad.

Military deals with France come as Egypt has been seeking to expand its capability in the face of domestic and regional threats from insurgent groups and political instability.

On 1 July, Egypt deployed F-16 fighter jets within its own borders to tackle attacks by an IS-affiliate group who temporarily overran a town in North Sinai. The jets bombed targets around the town of Sheikh Zuweid, using equipment including rocket-propelled grenades, after ‘State of Sinai’ attacked 15 checkpoints, killing at least 21 security personnel.

Egypt has also deployed fighter jets to strike militant positions in neighbouring Libya, after the killing of 20 Coptic Egyptians in February.  Egypt has been seeking to secure its border with the unstable state as well as leading on political solutions.

Since the airstrikes, Al-Sisi has also pushed to establish a joint Arab military force to tackle insurgent militant groups across the region.

The sale of 24 fighter jets by France’s Dassault Aviation to Egypt is the first overseas sale of the aircraft since the beginning of their production 14 years ago. The sale has been welcomed in France as a positive business deal, with India and Qatar also having placed orders. The French air force has agreed to receive only five planes this year, instead of 11, so that six may be delivered to Egypt.

Paris’s military cooperation with Egypt comes as a “first step” in creating a “unique relationship” between the two states in acknowledgement of Egypt’s central role in ensuring security in the region, Le Drian said in June.

Le Drian’s Africa tour will also include visits to the former French colonies of the Central African Republic, Djibouti and Congo Brazzaville.