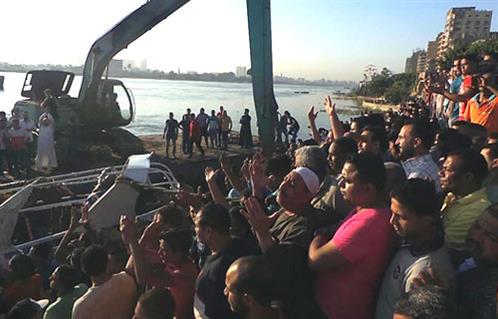 The captain of the Al-Warraq Nile boat, which sank last week after colliding with a barge causing the deaths of 38 citizens, was arrested and detained for 4 days pending investigations. The barge driver was also earlier arrested, state media reported.

Last Wednesday, the boat collided with a barge off Al-Warraq Island in the River Nile in Giza, leaving 15 dead and 5 injured. However, the death toll rose to 38 during the past few days.

Health Ministry spokesperson Hossam Abdel Ghaffar said during a TV interview: “The injuries have all been treated and released, but one of them was transferred to the Abbassiya Psychiatric Hospital.” Abdel Ghaffar added that “she probably had children who died in the accident”.

One of the survivors told state-run newspaper Al-Ahram that up to 55 people were on the run-down Al-Warraq boat, among them many women and children.

“The barge appeared out the darkness without giving any signals, and the boat captain was not paying attention to it,” she said.

Following the accident, Prime Minister Ibrahim Mehleb issued a series of decisions including the temporary halt of any activity by barges in Cairo from sunset to sunrise, until further notice is given in September. Mehleb also allocated EGP 60,000 for each victim killed, and EGP 10,000 for the injured.

Located in the Nile River near Giza, Al-Warraq Island residents use ferries to cross to the mainland every day. The ferries are rundown and usually take many more people than their capacity.