Have you ever imagined that the visually impaired might still have a chance to watch a full film in a normal cinema theatre? Have you ever thought they are able to see the backgrounds and atmosphere of each scene, get the full conversations between actors and even understand their feelings, facial expressions and body language? Zawya has made this dream come true!

In collaboration with Masreya Media Company, and under the sponsorship of Commercial International Bank (CIB), Zawya held the first screening for the blind and visually impaired on 11 June, where Youssef Chahine’s classical epic “Al-Nasser Saladdin” was screened and accompanied with an audio description for each scene.

A group of 25 people attended the first cinematic event of its kind in Egypt. To gather the biggest number of blind, the event’s organisers reached out to all the visually impaired schools and organisations and allowed anyone to attend.

“The whole thing started when I was attending a conference in Berlin in November 2014 on audiovisual translation, and whilst there participated in two workshops on Audio Description for the Blind for the museums and live shows,” said Aysha Selim, Dubbing director at Masreya Media, the company that introduced this technique for the first time in Egypt and supplied the audio description for the film.

“Initially, I was looking for ways to expand the business, since our field is in sound and audio-post production, but when Dr Soheir Qader, the festival’s general supervisor, approached me to present a new concept during the 22nd Cairo International Cinema and Arts Festival for Children that was held in March 2015, the idea came to my mind,” she added.

The festival invited Elena Di Giovanni to hold a 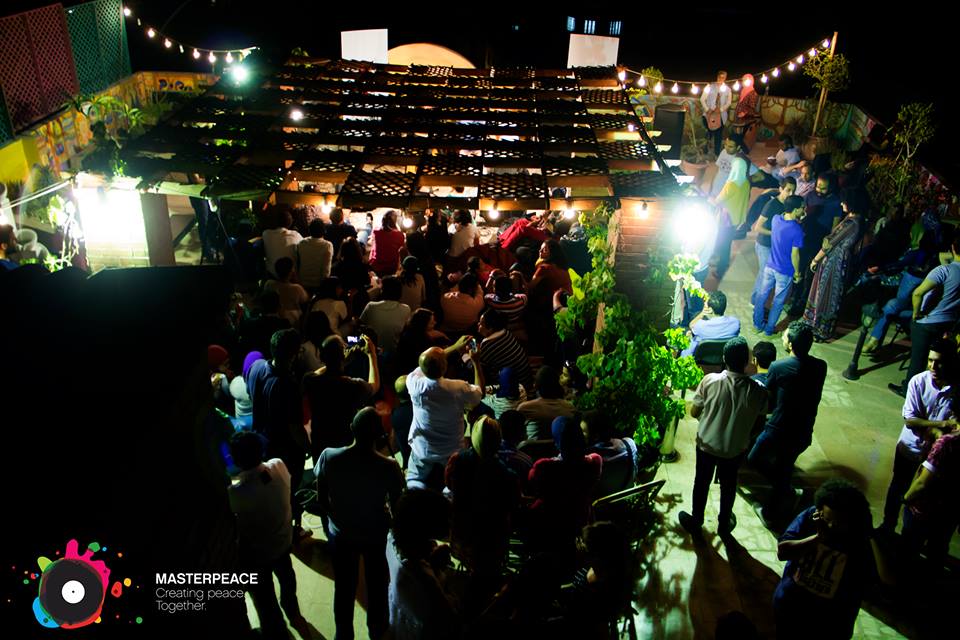 “We tested the technique with a three-minute clip of the dubbed version of the Lion King film that was presented during the festival in the presence of 30 visually impaired individuals, primarily from Al Nour Wal Amal charity,” she noted.

Selim aims mainly at providing a further branch to the audio description business, as well as playing a crucial role in the community.

“Handicapped people in Egypt are underprivileged and they really need to be integrated into the society.  Being deprived of one’s vision does not have to mean being culturally impaired. Societies progress through culture,” she said.

According to Zawya’s website, the audio description is an increasingly popular technique that allows films, television programmes, operas, theatre performances and exhibitions to be accessible to blind and visually impaired people. It involves additional narration that is used to describe scenes, body language, facial expressions and costumes, thus filling in the necessary blanks for those in need.

“The audio describer needs to be very familiar with the film to be able to choose the relevant information to voice over. The script is the most important factor. Depending on the gaps in the film between the dialogues, the most important information is relayed. The script is then recorded by a voice over talent at the studio that has to be very objective in his delivery. Finally this voiceover track is mixed with the film,” Selim added.

On 2 July, the second screening of blind films was held in Galaxy Cinema in the presence of leading actress Nadia Lotfy, after the great success of the first one. More visually impaired people attended.

“I knew about the two previous screenings from Fajr ElTanweer committee for blind and I fortunately attended both of them,” said Tarek El-Shenawy, a blind MA researcher, who is currently producing a complete book for blind children.

“The idea of producing films for blind people has been adopted in many countries around the world such as China, Morocco and European countries and that’s why I wanted to see how it would be presented and developed in Egypt. What really grabbed my attention a lot was the questionnaire we were asked to fill out. The event’s organisers wanted us to evaluate the screening to shed lights on the mistakes and flaws they can avoid later on which is something I really appreciated,” he added.

El-Shenawy attended the first screening with his wife for several reasons.

“I wanted someone to tell me to what extent the audio description we listened to was identical to what was going on the screen,” he said. For him, “‘Al Nasser Saladdin’ was a good choice for the first screening, because it’s a historical classical Arabic film.”

However, he blamed the organisers for not having enough description for all the scenes, and for some other little linguistic mistakes.

“I have to admit that they took every singly note we gave them into their consideration and avoided all that mistakes in the second screening,” he asserted.

However, El-Shenawy is against the idea of having special cinema theatres and film screenings for blind.

“I believe the only problem we have here in Egypt is the facilities dedicated for the blind. I hope one day we’ll be able to have ordinary cinema theatres with special equipment for providing audio description for the blind. This will allow them to go and enjoy watching films with their families which will eventually help integrate them in more social and cultural activities,” he noted.

In his opinion, this technique would also help illiterate people listen to special translation for the foreign films, which will help them acquire further knowledge about the cultures and lifestyles of the other countries around the world.

“Having special headsets in every cinema and an audio describer will help blind and illiterate people all over Egypt watch films and enjoy them!” he added.

In the golden days of Egyptian radio during the 90s, the directors and actors used to present great audio description for the series they produced. “We need the film and series makers to pay more attention to the blind. We need media practitioners to grab the attention to such initiatives and let more blind people know about them,” he added.

From Selim’s point of view, there are many players in question for this work, as it won’t be sustainable to be made for free on the long run.

“The government, especially the Ministry of Culture, needs to raise awareness regarding that. Cinema owners need to equip the theatres with headsets and infra-red techniques, so we don’t need special screenings for the blind. They can attend with their sighted friends and family and ask for headsets to be able to access the audio track,” she said.