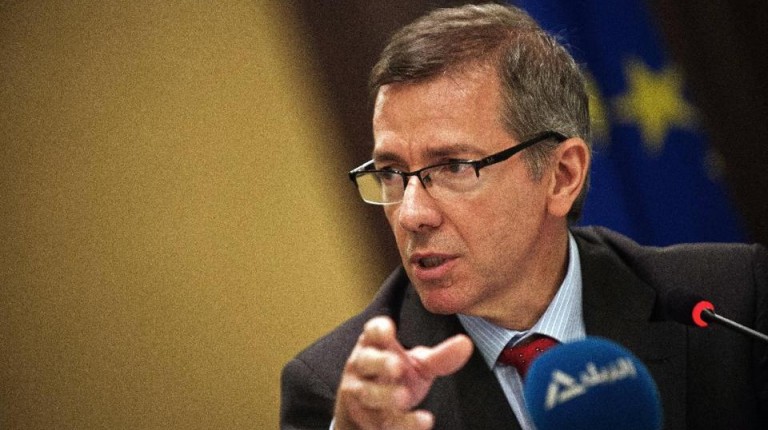 The duo discussed the political and security situation in Libya after the recent signing of the Skhirat agreement  between the internationally recognised government based in Tobruk and some of its opponents in the ongoing civil war.

The Egyptian side stressed the importance of implementing the agreement negotiated by UN envoy to Libya Bernardino Leon, and of international support for it. This would “put pressure on the parties that hinder the political process”, putting an emphasis on the legitimacy of Abdullah Al-Thinni’s Tobruk-based government, to which Al-Dairi belongs.

The two foreign ministers stated their goal that  the remaining parties sign the agreement, to form a unity government. This new government will “take over the fight against terrorism, build Libyan state institutions and achieve the aspirations of the Libyan people of building a modern and democratic state”.

Egypt has previously called for the lifting of the UN arms embargo against Libya, in place since 2011, and for international intervention in support of Al-Thinni’s secular government against the Islamists of the General National Congress (GNC) and the Libya Dawn militias based in Tripoli. Cairo is worried by the situation in Libya, due to the large number of Egyptian nationals in the country, and its own long and porous border with the war torn country.

Air strikes by the Egyptian Air Force in February 2015 targeted “Islamic State”-affiliates’ positions in Libya after the beheadings of 20 Egyptian Copts there. Egypt, a staunch ally of the Tobruk government, has in the past also been accused of delivering weapons to Libya despite the arms embargo.

Shoukry also contacted Lebanese Prime Minister Tammam Salam, according to a ministry statement Monday. Egypt’s foreign minister stated his concerns over the “apparent worsening of the political situation in Lebanon”, but reiterated Egyptian support for the Lebanese government despite any political differences.

Shoukry also said that it was in Egypt’s interest that Lebanon does not become “vulnerable to the deterioration of the regional situation”. He called for a consensus on presidential elections “as soon as possible to restore a normal situation”.

The last Lebanese general elections were set to take place in 2014, but since parliament failed to elect a new president, it prolonged its own term until 2017. Prime Minister Salam became the acting president in May 2014.

Another meeting on Sunday saw Shoukry holding talks with Saeb Erekat, Secretary of the Executive Committee of the Palestinian Liberation Organisation (PLO) and Palestinian Chief Negotiator. The two discussed “efforts to resume peace negotiations […] on the basis of a two-state solution”.

Following an update from Erakat on the reconciliation efforts between the various Palestinian factions, both officials stated that a “just, lasting and comprehensive solution to the Palestinian issue requires respect for the legitimate rights of the Palestinian people”. They once again named self-determination in a sovereign state, with East Jerusalem as its capital, as a key right and a primary means to prevent the rise in terrorism and extremism.

Shoukry further named the Palestinian cause a “central Arab issue”, and noted the efforts undertaken by the Arab Ministerial Committee, formed at the Arab Summit in Sharm El-Sheikh, in the Palestinian issue, further listing the recent initiative by French Foreign Minister Laurent Fabius.

Fabius introduced his new initiative to Arab and Israeli statesmen during a trip to the Middle East in June. While the Arab side largely welcomed the move, inviting Fabius to attend a meeting of the Arab Ministerial Council, Netanyahu denounced the move as forceful foreign intervention on Israeli affairs.

During another meeting with an Omani delegation headed by Foreign Minister Yusuf Bin Alawi, the ministers discussed primarily the difficult regional situation and ensuing security concerns. They emphasised the need for “[moving] away from sectarian, religious and ethnic divisions”.

They tackled the Syrian conflict in detail, hailing the UN envoy’s efforts, as well as the Geneva-1 conference’s decisions. The ministers also tackled the Yemen conflict, declaring their commitment to the territorial integrity of the country.

Oman shares a long desert border with the restive Yemen, and the multi-religious state feels increasingly threatened by the danger of militants crossing the border to fuel sectarian tensions.

Shoukry meets Libyan delegation in another formal, yet unfruitful meeting