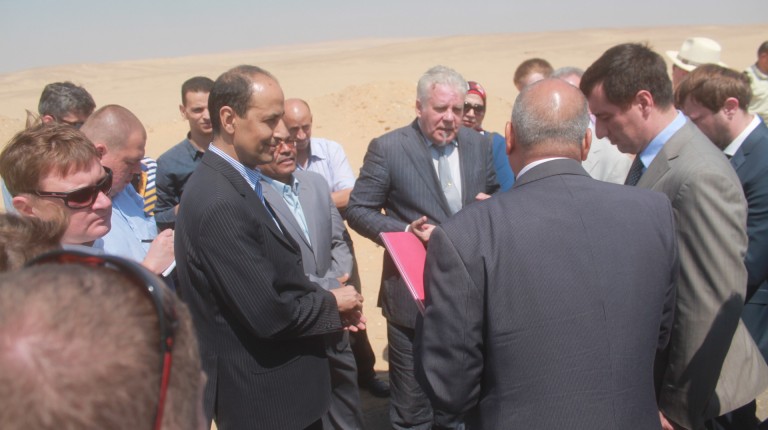 A Russian business delegation visited the Construction Products Company (CPC) on Tuesday to determine whether the industrial development company will be capable of developing a Russian industrial zone in Egypt.

Director of the CPC, Mohammed Masoud Al-Yafi, told Daily News Egypt that the delegation is also visiting other development companies to decide which company to assign.

The head of the Industrial Development Authority (IDA), Ismail Gaber, said that the Russian delegation consists of 30 Russian investors and they visited industry development areas in 6th of October City.  The delegation was accompanied by representatives of the IDA to point out successful experiences and models pertaining to industrial zones in Egypt.

The IDA announced that it will facilitate the development of the Russian industrial zone through one of the industrial development companies that will be chosen, such as CPC, Sami Saad Holding Company and Polaris Parks Company.

However, Polaris Parks CEO Tunc Ozkan said that they did not receive any invitations from the IDA or the Russian delegation to discuss cooperation opportunities.

Meanwhile, Gaber said that the field visits began on 26 July and will last until 30 July. The delegation also visited the North Ataka area in Suez and the industrial zone in the Fayoum governorate to determine an area where the joint industrial zone between Egypt and Russia will be established.

“They will select on Wednesday the area to establish their industrial zone,” added Gaber. “The inspection tours were based on the directives of the political leadership in both countries and the recommendations of the ninth session of the Russian-Egyptian Joint Committee.”

Gaber noted that the Russian economic development, industry and trade ministries showed great interest to establish the industrial zone and demanded these visits to find out the available opportunities, infrastructure, and facilities like electricity, gas and water.

Minister of Industry and Foreign Trade Mounir Fakhry Abdel Nour said that the Russian industrial zone will include food, engineering, automotive, equipment and machinery, shipbuilding and locomotives industries, among others.

Abdel Nour noted that the zone will help boost the Egyptian economy, increase the industry and trade movement and broaden the horizons of investment between the two countries.

In February 2015, Russian President Vladimir Putin announced during his visit to Egypt that there are currently over 400 Russian companies operating in Egypt for investment purposes.