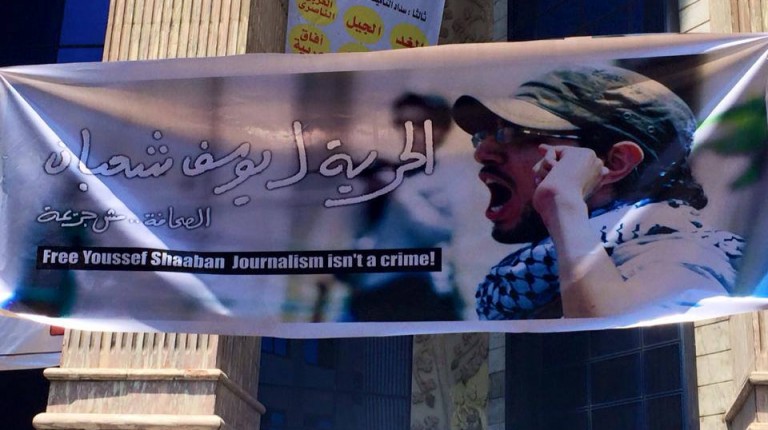 Al-Dostour Party continued for a second day on Wednesday a campaign entitled ‘Our Youth in Prisons’ to push for an end to “all forms of violations and violence against detained and imprisoned [persons]”.

The party began the campaign by profiling several young detainees, who are either in detention, under investigation, on trial, or, more importantly, “missing”, in alleged claims of kidnapping by state security forces.

Sha’ban was sentenced on 31 May, along with high profile rights lawyer Mahinour El-Masry, activist Loai Al-Qahwagy, and five others, to 15 months in prison in a case that dates back to March 2013, during the Muslim Brotherhood era, where 10 activists and lawyers were accused of breaking into the El-Raml police station in Alexandria.

The accusation refers to a sit-in in front of El-Raml police station in Alexandria that was held by a group of lawyers, who demanded an official apology from the Interior Ministry regarding the injury of their fellow lawyer at the hands of police personnel. The lawyers were then arrested and accused of attempting to break into the police station.

Al-Dostour said Wednesday that the Alexandria-based journalist suffers a health crisis due to his infection with hepatitis -C. According to the party .Sha’ban only knew about the infection one day before his arrest.

The freedoms commission of the Press Syndicate filed a report to the Prosecutor General to demand his release.

Shawkan was arrested on 14 August 2013 whilst covering the security forces’ dispersal of the pro-Muslim Brotherhood sit-in at Rabaa Al-Adaweya. Foreign reporters arrested at the same time were allowed to leave. Shawkan’s cellmate, Al Jazeera journalist Abdullah Al-Shamy, was also eventually released after 10 months.

Shawkan has been in prison for over than 700 days, and continues to be, without standing a trial. He is facing charges that include attempted murder, possession of weapons and ammunition, threatening public peace, disrupting the constitution, and sabotaging public and private property. The charges were described by his defence as “made up”.

Al-Dostour’s statement said that Shawkan was not granted medical care for his hepatitis-C, and that his medical and psychological condition continues to deteriorate. The journalist himself described his condition in a letter from prison: “My weak body, full of disease, became helpless to continue bearing hard imprisonment for two years, without any guilt except bearing my camera to shoot events with neutrality and objectivity.”

Galal is a second grade Applied Arts student who, according to Al-Dostour, went blind while in custody.

The party also said that Galal is unable to continue his study from prison due to his disability, also noting that he was denied medical care that could have saved his sight.

Galal was initially sentenced to 15 years in prison in absentia in the case publicly known as the ‘Shura Council’ trial, where 25 people were convicted with assaulting security forces, unlicensed protesting and rioting after a protest in 2013. The protest was held against an article in the constitutional draft issued by the former interim government that stipulates the referral of civilians to military courts. Galal’s sentence was reduced in March 2015 to three years in prison.