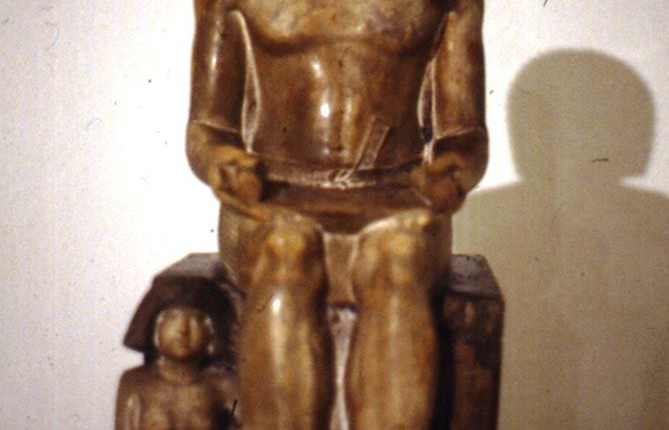 More than 160 years ago, in around 1850, a British Marquess, Spencer Joshua Alwyne Compton, who was living in Egypt at the time decided to pursue his love for Egyptian antiquities by financing an archaeological excavation in the Sakkara area. As a result of his exploratory project, a significant statue was discovered.

“SakhamKa”, an ancient scribe of the 5th Pharaonic dynasty, which dates back to 2300 BC, was celebrated with a sculpture made out of garnet. The scribe’s statue was carved out of the coloured stone, and measured 75 cm in height and 29.5 cm in width.

According to the Reviewing Committee on the Export of Works of Art and Objects of Cultural Interest (RCEWA), which is administered by the Arts Council England, the statue has a significant importance to the study of Egyptology. It has an artistic value regarding personal and memorial religion in Ancient Egypt and religious evolution, and the statue has a significant impact on the history of human self-portraiture in Egypt.

Nevertheless, and according to the archaeological findings act (dividing act) of Egypt at the time, the lord kept his excavation as part of his legal percentage. During the Mohamed Ali dynasty, antiquities were sold freely, locally and internationally. Also, personal diggings were authorised in an attempt to increase the exploration of ancient sights.

The policy gave both the financier and the country the right to divide any new findings by a legal percentage. However, due to the lack of specifications, laws and regulatory bodies, the statue was never registered in Egypt and the lord freely travelled abroad with the antique upon completing his stay in Egypt.