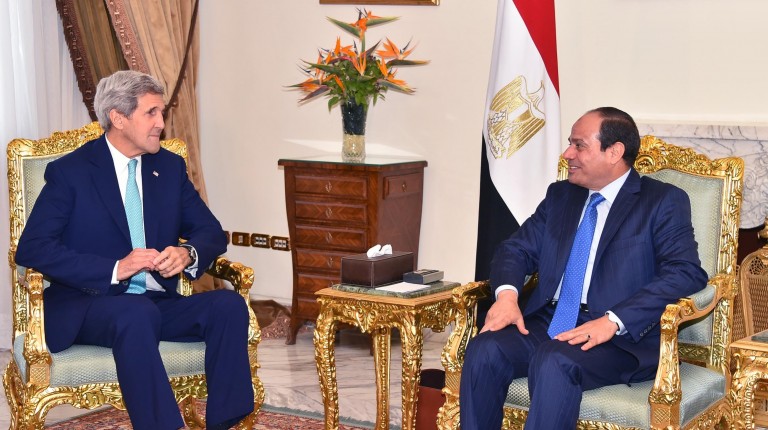 President Abdel Fattah Al-Sisi met Sunday with US Secretary of State John Kerry, and they discussed the enhancement of bilateral relations between the country and the counter-terrorism measures Egypt is taking in the restive Sinai Peninsula.

The meeting was attended by Foreign Minister Sameh Shoukry, US Ambassador to Egypt Robert Stephen, and Special Assistant to President Barack Obama Robert Malley, taking place alongside the strategic dialogue between the two countries.

The Egyptian presidential spokesperson said Sunday that Kerry expressed his country’s willingness to consult with Egypt on “different regional issues, and to benefit from its experience and leading role in the region”.

Egypt is one of the US’s strategic allies in the Middle East region. The US is also supportive of Egypt’s measures to counter the militant insurgency in Sinai.

Kerry expressed his government’s desire to aid Egypt in its counter-terrorism measures. Al-Sisi welcomed President Obama’s desire to cooperate with Egypt to put a stop to the rise of militancy in the region.

The two officials also discussed Egypt’s steps to improve the economy and to attract investors. Kerry praised the Suez Canal Axis project, which is set to be inaugurated on Thursday.