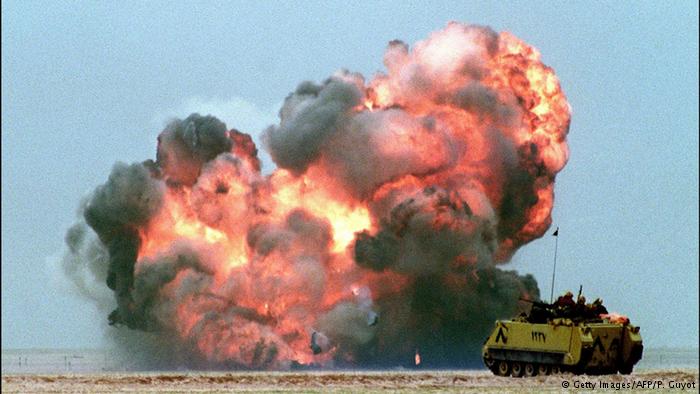 It was a provocation. Kuwait had increased its oil output to the disadvantage of other oil producers, flooding the market with surplus barrels and pushing down prices. Neighbors encouraged Kuwait to stop its surplus production immediately, no matter what the cost. The country, however, continued to produce oil, and Iraqi President Saddam Hussein thought it time to teach his tiny southern neighbor a lesson. On 2 August, 1990, he ordered Iraq’s army to attack. Kuwait was quickly occupied.

Saddam did not know, or did not anticipate, that his troops would leave the country almost as quickly as they had invaded it. By August 7, US President George Bush had sent troops to protect Saudi Arabia, christening the mission Operation Desert Shield, and he would need only a few months to form an international coalition capable of striking if needed. The United Nations repeatedly demanded that Iraqi troops withdraw from Kuwait, but Saddam ignored the appeals, thus setting Operation Desert Storm into motion. On January 17, 1991, the international coalition launched its first airstrikes on Baghdad. Five weeks and more than 100 airstrikes later, coalition ground troops marched into Iraq and Kuwait on February 24. They met with very little resistance, and five days later Saddam’s forces were completely defeated. “The mother of all battles,” as Saddam had called it, set into motion the events that would bring the dictator down 12 years later, when the United States – now led by Bush’s son George W. – invaded Iraq a second time.

The war for Kuwait began a new chapter in modern warfare and a new media approach to war reporting. For the first time, a conflict was covered as it happened. TV viewers watched fighter jets take off from remote aircraft carriers and the United States, at that time the world’s last superpower, display its dominance. In the beginning, the war was described as a procedure so surgical it would leave no one injured. Often referred to as “Stormin’ Norman,” US General Norman Schwarzkopf repeatedly stressed the tidiness of the strikes. Quickly, however, the dirty side of the high-tech, supposedly clean war emerged. The public learned of “collateral damage.” This term was also common when drone warfare was launched at the turn of the millennium, but by then it rang hollow. In 2014, the British rights organization Reprieve published a report stating that multiple drone strikes targeting 41 named individuals over the course of several years had led to the unintentional deaths of 1,147 people. Smart bombs are not nearly as intelligent as the military claims they are.

When the battle for Kuwait broke out, the Middle East was a different place. There were few major extremist currents running through the region, and most Arabs seemed to oppose religious agitation. Saddam Hussein realized this when he tried to shock the international coalition in January 1991 by saying: “We are calling on all Arabs, all religious fighters, to join the jihad. We call on you to attack the powers of evil, of treason and corruption, and their interests everywhere. It is your duty.” The appeal was in vain. Nobody wanted to follow the self-proclaimed holy warrior Saddam. Nobody even joined in when he tried to emphasize the religiosity of the fight by launching Scud missiles toward Israel.

As if Saddam hadn’t caused Iraqis enough trouble, in the following years international sanctions hit the population hard. People fell into deep poverty and became embittered and increasingly susceptible to radicalization. “Perhaps a ‘return to God’ was part of Iraqis’ way of making sense of the calamities that befell them in the Gulf War and immediately afterwards,” the Iraqi political scientist Fanar Haddad wrote in his 2011 book, “Sectarianism in Iraq: Antagonistic Visions of Unity.” The existing hardship and political corruption caused by the 1980-88 war with Iran and environmental damaged exacerbated by the Kuwait conflict probably contributed to the gradual societal acceptance of radicalization, aided by the politically unjustified and internationally criticized US coalition invasion of 2003, which plunged the country into chaos.

Saudi Arabia also saw heavy collateral damage. The kingdom gave Americans permission to launch attacks on Iraq from Saudi airfields. Some US troops stayed there after Operation Desert Storm had been completed, something that angered the fighters who had formed the terrorist group al Qaeda around 1993. They had already declared the ruling Saudi family to be illegitimate and had animosity left over to direct at the United States and its partners. The international community had just managed to break up the military power of the secular Saddam Hussein, and it would now have to face considerably more dangerous and religiously motivated foes.

A musical plea for Iraqi-US relations