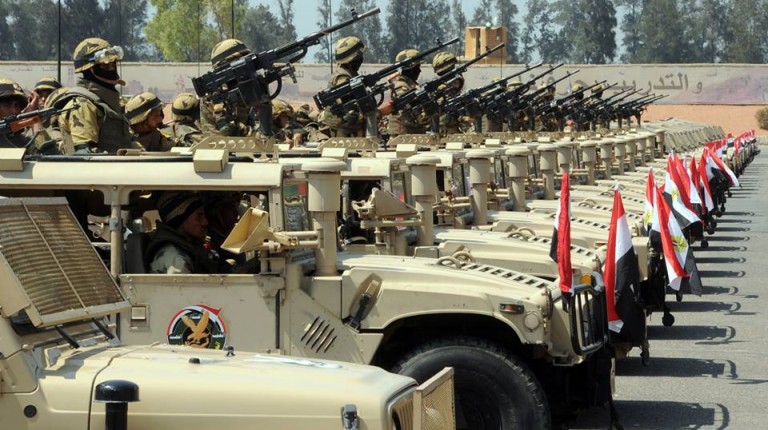 The Egyptian armed and police forces will take a leading role in securing the Suez Canal opening next Thursday, using heavily equipped forces from the different military divisions.

President Abdel Fattah Al-Sisi met Saturday with members of the National Defence Council, in a meeting that concluded the steps necessary for securing and preparing for the opening, according to a military statement Sunday.

Defence Minister Sedki Sobhi ordered the preparation of the army’s finest fighting elements to secure the event. Heavily armoured units from the Third Field Army will also secure the Suez Canal axis, as well raising its alert level for bases and patrols

The Navy, Air Forces, Special Forces, and Paratroopers will arrange missions to monitor the opening, and military police will facilitate the entrance of the delegations.

According to the statement, the Armed Forces’ General Command will provide the area of the celebrations with qualified medical units, ready to evacuate individuals via helicopter ambulances. Additionally, the army administered hospitals in the Suez Canal area will be on high alert, and security planes will roam the area to secure the vicinity and provide live streaming.

The armed forces added that troops are also securing the country’s borders, in the air, sea, and land, to counter any “attempt to cross the border”. It added that army troops will cooperate with civilian police forces to secure official and public buildings “to abort any criminal activities that might spoil the celebrations”.

The Ministry of Health presented a report of its plan to secure the celebrations to Prime Minister Ibrahim Mehleb. The ministry said it has been providing full medical care to all workers in the Suez Canal Authority and will continued to do so, starting with providing ambulances, vaccines and medical awareness. He added that an operation room will monitor the opening day, with the alert level to be raised in all hospitals especially on roads leading to the celebrations.

The New Suez Canal will be officially opened in Ismailia on 8 August, in an opening campaign that has drawn the attention of many worldwide.

The new Suez Canal project was launched in August 2014 by President Abdel Fattah Al-Sisi, who referred to it as a national project. It is expected that a new 72 km-long canal will be dug alongside the original, implemented over a year.

Mamish briefed Al-Sisi on the details of the plan for the east Port Said area as part of the overall development approved for the Suez Canal area.

“The vision was outlined for the expansion of the east Port Said harbour and the development of the industrial and logistical area around it to establish an industrial zone covering 40m sqm with the aim of generating some 400,000 jobs,” the presidency spokesperson’s statement read.

Al-Sisi instructed that the plan be implemented immediately in coordination with the Suez Canal Authority, the Engineering Authority and the project consultants. Work is to begin after the inauguration of the New Suez Canal, according to the statement.