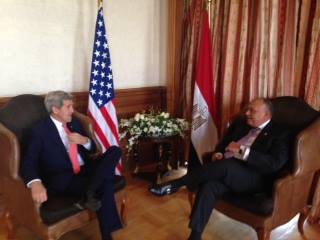 Head of the independent Egyptian Organisation for Human Rights (EOHR) Hafez Abu Seada held a meeting on Monday with Tom Malinowski, deputy US Secretary of State for Democracy, Human Rights, and Labour during his visit to Cairo.

Malinowski is scheduled to meet with members of Egyptian civil society and political parties aside from participating in a diplomatic dialogue, amid a visit by US Secretary of State John Kerry to Cairo for a “long-awaited” bilateral ‘Strategic Dialogue’ with Egypt.

“Mr. Malinowski expressed full understanding of the security vision to combat terrorism as it is one of the main topics of ongoing US-Egyptian discussions,” Abu Seada said in TV statements Monday night.

In his response to the current US stance on Egypt’s human rights status, Abu Seada explained that the US promotes a valid idea, “that best way to face terrorism is to reinforce human rights, and to give people peaceful means of expression to avoid pushing them towards violence”.

Among the human rights’ issues discussed between the two were the role of civil society, political detainees who have not been engaged in violence, as well as the controversial Protest and NGO laws. Parliament elections were also discussed, as Egypt issued laws that have been delaying elections just ahead of Kerry’s visit.

Moreover, Abu Seada stated that it has been communicated to the US delegates that there is a “public outrage due to the continuation of relations between US officials with Muslim Brotherhood members”, which the Egyptian state has listed as a terrorist entity.

Before his visit, Kerry had met with US citizens Mohamed and Hanaa’ Soltan in Washington. Mohamed Soltan is the son of prominent Muslim Brotherhood member Salah Soltan. He was released from prison after almost 500 days on hunger strike following a life imprisonment sentence and the waiving of his Egyptian nationality.

Kerry met with Soltan and his sister and expressed his “happiness to see him out of prison and safely home in America”. The two discussed Soltan’s experiences in Egypt and the conditions of his detention, according to the state department.

Commenting on the current strategic discussions, former assistant foreign minister Hassan Haridy said that after 22 months of the toppling of the Muslim Brotherhood and the previous US stance, US is reconsidering its perceptions towards other countries in face of terrorist groups.

“This happened because regional circumstances have developed and taken a very different course than the US administration portrayed to the world. The US is also aware that Egypt is a key player in the region,” he said in an interview with Al-Hayat TV Monday.

As for the Muslim Brotherhood, Haridy said that “neither the US nor Europe have or will categorise the Muslim Brotherhood as a terrorist organisation because the latter has been able to sell themselves as the protectors of the West’s regional interests”, adding that Soltan and his family “are not and do not represent Egyptians”.

Kerry had previously reaffirmed: “America’s commitment to promoting respect for human rights and space for civil society as part of our engagement with Egypt.”

However, Abu Seada said that despite the US’s disagreement with Egypt on several issues, the topic was not going to be “publicly spoken of or debated”.