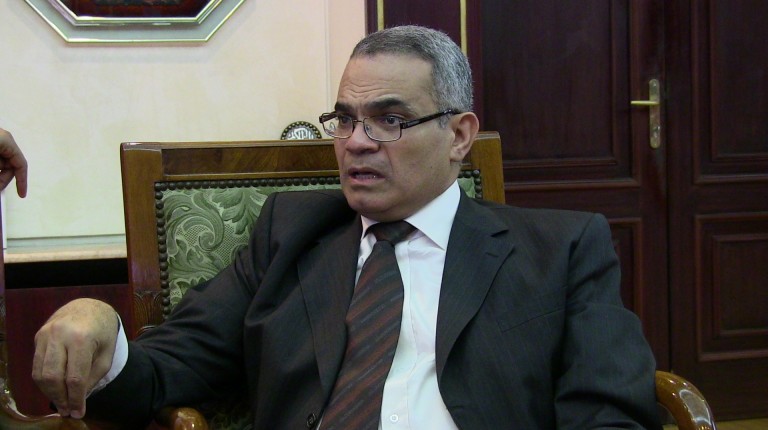 The ambassador did not deny his responsibility for sending attachés and media personnel abroad, but, on the other hand, clarified that his authority is less than that of the Egyptian ambassador in the concerned country.  He admitted that an Egyptian ambassador is responsible for the media personnel, and that their performance showed their lack of training. He also complained about the reduction in media representation abroad because of rationalising expenditures.

Further, the latest crisis concerning the persecution of foreign reporters was discussed.

Where do media attachés stand regarding press attacks on Egypt abroad?

They are there, but let us agree that in order to respond on an article, you should present another article, to respond on thoughts. The best weapon is displaying other thoughts. Officials who are responsible lack credibility in the eyes of the public opinion as well as the media and this is worldwide.

What are the main solutions, in your opinion, for the current diplomatic crisis and lack of media representation abroad?

To cooperate with other parties on the different levels of media, culture and politics. We should choose those who believe in our cause and are convinced of the justness of our position. They will be able to defend us from the senior media and journalists who have more access to public opinion in their own countries. They can also persuade their people with the truth about what is happening here.

What has the SIS done in this regard?

After the revolution of 30 June, major countries attacked us. In Africa, we also suffered a great injustice and a major attack. Our activities were frozen without hearing our opinion. In response, we summoned 10 editors with the biggest African newspapers before the presidential elections so they can know what is really happening and compare it with what they hear about us from others. They engaged the Egyptian street and learnt the opinion of the people.

One must not throw the burden of representation of Egypt on the shoulders of SIS and its employees. There are more than 3,000 employees in Egypt’s governorates and its media offices abroad, and 620 journalists work with the authority, many of whom need long-term training.

What is your opinion regarding the performance of the press attaché during President Al-Sisi’s visit to Germany?

We have a non-administrative media attaché. However, due to lack of funding, it had to carry out both roles. There was another ​​media consultant, but their contract ended and was sent back to Egypt prior to Al-Sisi’s visit.

Russian President Vladimir Putin came to Egypt with only eight media consultants. However, during our visit to Addis Ababa, where all African countries gathered, we had 75 media consultants with us.

What harm is it if the number increases or decreases?

What are the preparations for the president’s visit to Britain, which is by no means less important than his visit to Germany?

We are preparing by monitoring all that is written or said about the visit in the media over there, and we are communicating with levels that cannot be revealed at the moment.

Now onto another highly criticised measure taken by the SIS, the persecution of foreign journalists and reporters, through fact checking. What is your opinion on that?

This is a measure applied in democratic developed countries, through which anyone who publishes false information is exposed by revealing the falsehood of the information of the entity that does not commit to professionalism and impartiality.

Why apply this measure now?

I have been working on it for a year, and we have trainers for our employees. The whole issue is that I aim to motivate reporters to seek credibility, or else they would affect the state of security by spreading false information.

So you have to provide information channels to media personnel, so they wouldn’t fall prey to false rumours, is that your opinion?

Yes, we are working on that, and we all suffer from information shortage, but we always have to make sure of the credibility of all the information we get and double check it with the official source, not just get information from enemies of the state and terrorists and their sites.

When did that happen?

In the Air Defence Stadium incident, it was spread across social media that 200 of the Zamalek Ultras were shot dead at the hands of the police. Two days later, we found out that they were only 19, and they died of suffocation and trampling.

Also in the Sheikh Zuwied confrontations, a few hours after the confrontations, major agencies announced that our martyrs exceeded 70, and at the end they were only 17. Despite our regret for the ones we lost, the difference between what was alleged and reality was huge. It was announced that the US is ready to intervene with its ships and that Sheikh Zuwied was turning into an “Emara” (state) for terrorist organisations.

One of these agencies supplies information to more than 1,200 television channels in the world, how is that possible? They said some of our soldiers had been captured, do you know how Egyptians would feel about that?

Why fact checking now, at the same time as the Terrorism Law crisis?

The crisis in Sinai forced us, especially as the media has precedence in causing the collapse of countries and the defeat of great armies. Two television channels were able, alone, to deceive the Iraqi army and cause the fall of Baghdad and the whole of Iraq, by false information.

Before the Sinai crisis there were the unforgivable professional mistakes in covering the assassination of the Prosecutor General. All I want to know is, from where did the journalist get the false information, and why didn’t he inspect its accuracy and ask the official source? I do not force him to be restricted by the information I give him, but I ask him to ask all the concerned parties and make sure the information is accurate.

But do you agree that the violations in professionalism are an outcome of polarisation that the state participated in creating after January 2011?

I do agree with you that we do not need to reinvent the wheel, nor to design a new law or system, but we need to clarify things and go back the professionalism and credibility. Then, no one will dare question you, especially as we are confident the media is not an enemy of the nation, nor is the state an enemy to it. The media is the mirror of the country and if that mirror is not honest and clear, then the country is in great danger.

The SIS could enter into complicated confrontations with foreign reporters and end up in court, which would tarnish it simage. What do you think of that?

I will not go to court, but I will expose anyone who works according to their own agendas and does not follow professional standards or moral frames of media work. I will deal with anyone who insists on crossing the line and harming my national security, according to the law, especially as most foreign correspondents are originally Egyptians working in foreign media agencies and entities.