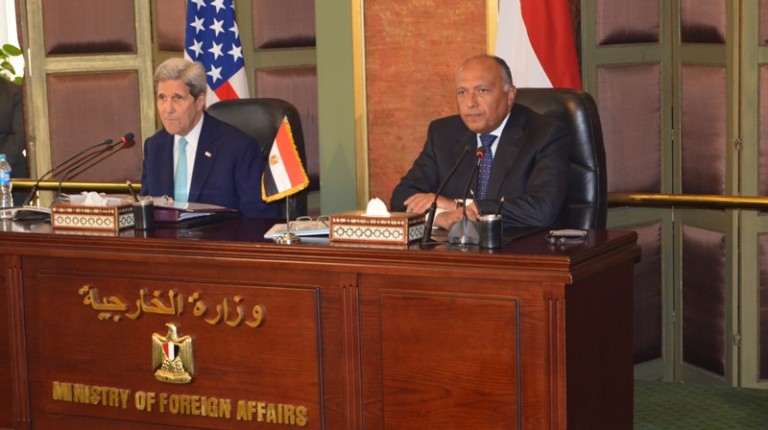 US Secretary of State John Kerry reiterated his country’s support for Egypt in its fight against terrorism and welcomed its participation in the US global anti-“Islamic State” (IS) coalition, during the strategic dialogue which occurred between Kerry and Egyptian Foreign Affairs minister Sameh Shoukry on Sunday in Cairo.

Despite concerns over the human rights situation in Egypt, which remained as a main condition on the talks-agenda between both countries, the two countries agreed y on mutual cooperation in multiple fields, from security, military cooperation, and resolving regional issues, to investment to education.

US resumed its military aid to Egypt by handing eight F-16 fighter jets to the country on Thursday after two years of suspended military aid.

The two sides agreed to continue close cooperation to improve their mutual security, to combat terrorism and extremism, and to work together to delegitimise terrorist groups, according to an official statement by the Egyptian Foreign Ministry spokesperson.

They also underlined the importance of working together to address the current conflicts in the Middle East region, especially in Syria, Iraq, Libya and Yemen.

According to Kerry, Egypt’s President Abdel Fattah Al-Sisi has made notable progress in the energy sector, and has overcome the power-outage crisis compared to last summer.  He also mentioned the new investments law, which is expected to facilitate the set-up process for new investors in Egypt, as one of the achievements that will potentially increase mutual cooperation between both countries.

During the Economic Summit in March, Kerry said the US would support Egypt’s economic progress “in any way we can” to ensure lasting growth and to attract needed investment.