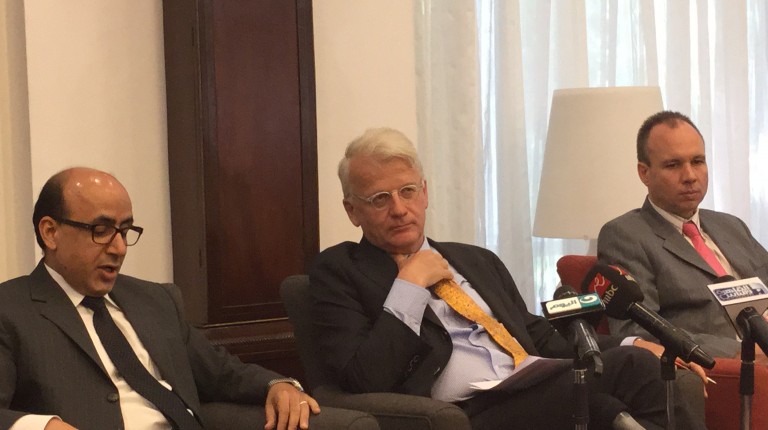 The German Embassy in Cairo held a press conference Monday with the German ambassador to Egypt, Hansjörg Haber, discussing an array of topics.

These included the bilateral relations between the two countries and the German Vice-Chancellor’s participation in the inauguration in the News Suez Canal Axis Project.

At the beginning of the conference, Haber said that he will leave his post by the end of August, to head a mission of the European Commission. He stated that he only wished that he could have witnessed parliamentary elections being held in Egypt before leaving the post.

Haber commented on the status of German-Egyptian political relations, saying that he is “happy that, within the period I spent in Cairo, I helped the return of the dialogue between the two countries to what it was like before, ending with the visit of President [Abdel Fattah] Al-Sisi to Berlin”.

“For us Egypt is the most important country in the region, without stability in Egypt there will be no hope for stability in the region,” Haber said.“The content of the political dialogue between the two sides focus on emphasising the stability in this country which is surrounded by a region that is burnt with civil war, violence and terrorism, of which some infiltrate into the Egyptian borders.”

Haber added that there might be points of difference in perspective which were discussed during Al-Sisi’s visit to Berlin.

Haber said: “The basics for any stable societies are respect for human rights, creating space for youth to express themselves and allowing civil society to strongly engage in the political affairs.”

“Discussions are continued between the two sides and it is a part of the German policy on Egypt. We want to support Egypt economically, especially in the fields of training, and also we want to express our opinion on matters that do not help stability,” he added. “And I think this is possible between friends. We want the dialogue between us to continue.”

Haber said that Germany wants relations with Egypt to be positive, and that “doesn’t prevent an honest dialogue between the two sides”.

Answering a question from Daily News Egypt on the efficacy of discussions with the Egyptians about points of disagreement, which he stated to be guaranteeing human rights, allowing the civil society to prosper and the issue of the protest law, Haber noted that the stances of each side are known.

Haber also answered a question on a possible change in the German stance towards the Muslim Brotherhood, stating that his country is “against terrorism of all kinds and from all sides and we cooperate with our partners against it”. However, he refused to level between the Brotherhood and terrorist organisations.

“There are organisations that revealed themselves as terrorist organisations. In Egypt for example, there are Ansar Bait Al-Maqdis and Ajnad Misr, but the Brotherhood is in a foggy area and that showed after the assassination of the Prosecutor General. They always denounce responsibility for these deeds and that they don’t control their bases. We have to be accurate and verify who commits those attacks,” he said.

Haber further commented on the current level of economic cooperation between the two countries, stating that the trade balance between Egypt and Germany in 2014 was equivalent to €4.4bn.

Haber indicated that he and a delegation from Germany, led by Germany’s Vice Chancellor Sigmar Gabriel, will be attending the Suez Canal Axis’ inauguration that will take place on 6 August. However, Gabriel will not hold meetings with Egyptian officials during the visit.

Haber said: “I congratulate Egypt and Egyptians for completing this historical project. 6 August however is not the end of the journey, it is the beginning of ongoing work for Egypt, thus there must be planning ahead for the implementation of mega projects.”

Concerning the Suez Canal Axis development project, Haber said that they do not have the comprehensive details for the projects to be established there. He indicated that the German side was provided with only some information concerning them during the Economic Summit that was held in March in Sharm El-Sheikh, and as a result they still do not know if they will be participating in any of them.

In the end, the decision to participate in the projects is the decision of German companies or investors who are interested, but they still need to more confidence in the availability of supporting conditions for investing, Haber added.

“We are following up on the legislative reforms being carried out in Egypt that concern the investment and economic climate of the country. We analyse them to see what they offer for investors,” Haber said. Moreover, German investors are on continuous dialogue with the Egyptian government to reflect on their expectations from them, and specifically from the new investment law.