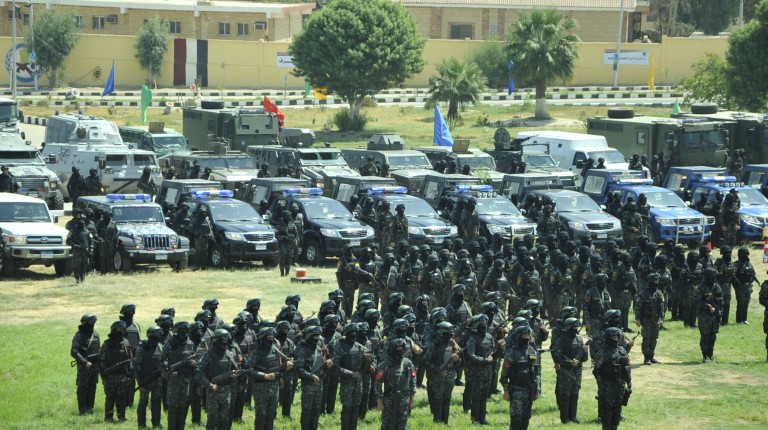 The armed forces and police are continuing their preparations to secure the internationally awaited Suez Canal Axis opening next Thursday.

The Egyptian armed forces’ Chief-of-Staff, Mahmoud Hegazy, revised the main plan to secure the celebrations, and visited a number of check points, according to an army statement.

Hegazy observed the fighting units responsible for the opening ceremony’s security, asserting that “men of the armed forces are responsible for protecting Egyptian national security, and securing the news Suez Canal is a holy mission”.

The armed forces added that troops are also securing the country’s borders, via air, sea, and land, to counter any “attempt to cross the border”. It added that army troops will cooperate with civilian police forces to secure official and public buildings, “to abort any criminal activities that might spoil the celebrations”.

Hegazy was accompanied by General Osama Askar, head of the Sinai Command, who demonstrated the troops’ readiness.

In addition, the Ministry of Interior finished its preparations, which entails deploying special troops in the vicinity of the celebrations.

Major Ayman Shehata, head of the Egyptian Army’s Special Forces, said in a video published by the army: “We studied our mission and will protect the Suez Canal with all our force.”

He told his soldiers that “the rules of engagement are clear. Execute them with force, without mercy on whoever wants to spoil the celebrations of the Egyptians”.

“You have the honour to be among the forces that are protecting Egyptian people,” Shehata said.

The New Suez Canal Axis will be officially opened in Ismailia on 6 August, in an opening campaign that has drawn attention worldwide.

The new Suez Canal Axis Project was launched in August 2014 by President Abdel Fattah Al-Sisi, who referred to it as a national project.