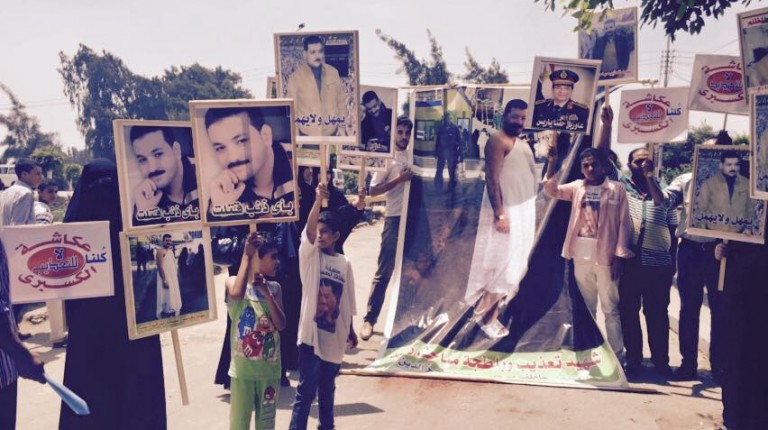 The Damanhour Criminal Court held on Tuesday the first trial session of three policemen facing accusations of torturing a detainee to death in the governorate of Beheira last May, among demonstrations held by the victim’s relatives outside court.

According to Al-Haqanya Law Center, which filed the charges in favour of the 32-year-old victim Al-Sayed Al-Kosbary, the three suspects should be facing murder charges in accordance with Article 126 of the Penal Code.

The next hearing is scheduled for 5 October, according to the family’s lawyer Mohamed Abdel Aziz.

The law stated that any public official found guilty of ordering or participating in physical torture against suspects to obtain forced confessions should face a strict prison sentence from three to 10 years. However, if death is the result of their action, their penalty is equal to murder.

However, prosecution authorities are currently charging the suspects under Article 236 of the Penal Code, which states that anybody who commits assault without intention to kill, but which results in death, should be sentenced to prison from three to seven years.

The sentence is subject to increase if the element of “planning,” or “insisting” were proven in the case. A 24-year-old Central Security officer was convicted of killing activist Shaimaa Al-Sabbagh in the same method, receiving 15 years in prison.

The current main suspect is also a 24-year-old police officer, along with a 37-year-old conscript and a 38-year-old police informant. The three are accused of intentionally heading towards the victim’s prison cell in Rashid Police station.

According to the prosecution authorities’ document, the suspects repeatedly kicked the victim in different parts of his body, with no intention to kill him, yet their injuries ended his life according to autopsy reports and evidence documents.

The suspects are currently detained pending trial. The prosecution ordered their detention on 9 May, as Al-Haqanya reported that the issue goes back to when Al-Kosbary was arrested by security forces from his workplace in Rashid (Rosetta), a coastal city of the governorate, with no charges.

Moreover, the main eyewitness in a torture case was also reportedly beaten by police forces on 25 July, in the northern coastal city, ahead of a testimony on 4 August.

He was severely beaten and dragged on the ground in the process, then taken to Rashid police station, where he was accused of possessing a firearm, and the charge of resisting authorities was also added for him and his relatives.

Al-Kosbary, 32, did not immediately receive medical treatment when he was taken to Rashid Hospital, which stated the injuries inflicted on him were by the police force. His accusations of police torture were ignored by the prosecution.

Following a second round of beating and torture, Al-Kosbary eventually collapsed and was transported to the hospital on 5 May, but he did not survive to reach it.

The victim’s relatives filed a complaint against the police officer and two undercover agents, accusing them of assaulting the victim and causing his death.

On the other hand, local media reported the security narrative stated that the victim was arrested before attempting to resist and escape security, and was found in possession of weapons.

According to Nady Atef, director of the Justice and Human Rights Development Centre, a Minya-based NGO, the victim was taken from his workplace, a car agency, which security forces raided on 1 May.

When the victim demanded to see a search warrant, police forces beat him and he sustained head injuries as a result. The police also assaulted his mother and sisters who came to his rescue. “But even if he was a criminal, there should have been legal measures against him, not torture,” Atef previously said.

A dozen local residents had gathered in front of the police building, accusing the police of torturing him to death. They were dispersed by force, and there were at least eight injuries reported.

Torture to death comes on top of the inhumane treatment faced by citizens inside places of detention, highlighted by human rights lawyers and civil society workers. Al-Kosbary’s lawyer hopes to get a minimum of three and a maximum of five year prison sentences in favour of his deceased client.