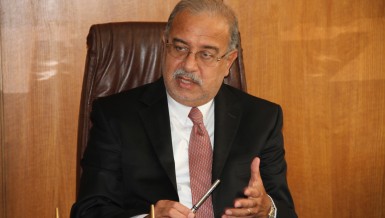 The Ministry of Petroleum has been conducting feasibility studies for a number of refining and petrochemical projects that will be included the new Suez Canal Axis Development plan.

Minister of Petroleum and Mineral Resources Sherif Ismail said the petroleum sector has a number of new projects that will be launched. The plan includes projects in the refining and petrochemicals fields within the economic zone south of the Suez Canal.

He added that these projects will be an investment for the importance of the new Suez Canal, because it will become a very important navigational corridor. This is due to the expected increase in trade and transport movement in the future, especially with regards to crude oil, petroleum products and natural gas.

Ismail said the petroleum sector is currently implementing a number of projects to raise the storage capacity and number of transport operations which, when provided, will secure the domestic market.

He explained that they include the SUMED pipelines project in the Gulf of Suez and the development of petroleum products reception facilities in the port of Ain Sokhna. He added that the projects also target increasing Egypt’s share of the ship fuelling industry and its services. This is expected to bring huge revenues, as the Suez Canal will attract huge tankers.

Ismail emphasised the petroleum sector’s ability to provide the project’s needs and the forthcoming industrial zones within the Suez Canal Axis Development projects. This is especially with the arrival of the second gasification ship in September, which will be allocated to provide the needs of industry.

He said that the petroleum sector’s contribution in the new Suez Canal project is on two levels. The first level is the provision of fuel required to operate the equipment that participated in the drilling with a rate of 3,000 tonnes per day of diesel and 1,000 tonnes of marine diesel. The second level is Petrojet’s presence as a contractor in the excavation in the southern sector of the canal, and was able to fulfil the required tasks in record timing and using the latest equipment.

Ismail said that Petrojet participated in the drilling and dredging of more than 11 million cubic metres of sand in the record time of four months. Petrojet is currently contributing to the construction of the two tunnels for cars and another for trains under the canal to the north of Ismailia. It comes within the plan to implement six new tunnels under the Suez Canal for cars and trains within the area of Port Said and Ismailia in order to develop the Canal Zone and the surrounding provinces and link the Delta governorates to Sinai to serve the Suez Canal Axis hub.

He pointed out that the new Suez Canal project is an important milestone to the Egyptian economy that paves the way towards an ambitious economical plan.

He said the project will put Egypt on the steps of a new phase of economic growth in the upcoming period by continuing the conversion of the Suez Canal area to become an economical, logistical, and commercial centre that influences world trade.

This also strongly contributes to the promotion of investment opportunities in all economic sectors and the emergence of new economic entities that rely on value-added activities and complementary industries. This includes many job opportunities for youth, and is expected to achieve a tangible leap, economically and socially.

He pointed out that the completion of the new Suez Canal project in record time is a national achievement that counts for Egypt, its leaders, its people, and all those who participated in this achievement. This achievement demonstrated the ability of Egyptians and their cohesion.

Ismail added that the project represents a successful Egyptian model in planning, financing, implementing and launching major projects worthy of the status of the state, and the insistence of the political leadership to finance the project purely through national funds.

“This is a clear message that Egypt is coming back strongly by the sweat and effort of its children. The active participation of all sectors of the state, including the petroleum sector, stems from this vision that targets the prosperity of Egypt and its status,” he said.

Ain Sokhna petrochemical project funding to be completed by year-end