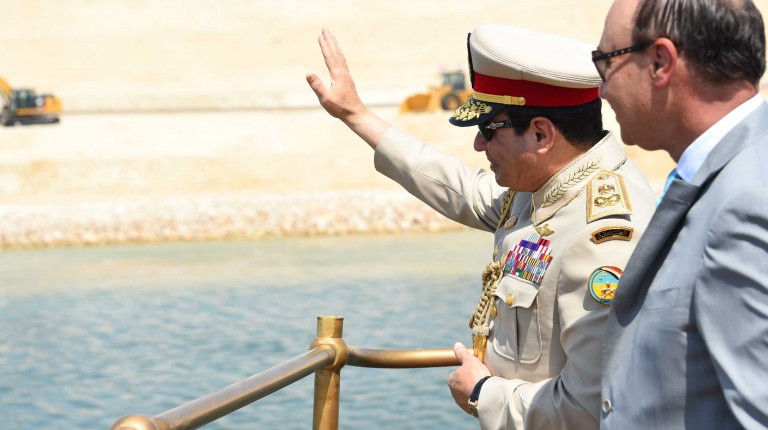 President Abdel Fattah Al-Sisi officially inaugurated the New Suez Canal as ships passed through it, in a wide-scale ceremony attended by world leaders.

“The New Suez Canal was completed under tough political and security circumstances, work of day and nights. Lives of soldiers, police forces and innocent citizens were lost to militant groups,” Al-Sisi said in his speech, at the celebration of the inauguration of the New Suez Canal on Thursday.

The president congratulated the Egyptian people, and those who worked in the project, and mourned the security forces who died facing terrorist groups. He further announced that the project is the beginning of a series of national projects in transportation, land reform and aquaculture at the canal.

Al-Sisi added that two projects previously announced by the state are set to start soon: the Suez Canal Axis Development project and the New Capital City. The president further spoke of the required political reform in terms of achieving social justice and preserving human dignity.

Al-Sisi signed the memorandum to operate the New Suez Canal, as he had sailed Thursday noon to the canal on board the former royal family’s ship, Al-Mahrousa, accompanied by a group of Egyptian citizens, including a sick child who had been granted the visit by the president. The Egyptian government has propagated the project to the world as a significant contributor to the country and global trade, thus inviting the world to participate and watch its opening.

“The canal is Egyptians’ message to the world that they choose life over terrorism, love over hatred,” Al-Sisi said, highlighting counter-terrorism efforts. Among the attendees were French, Kuwaiti, Bahraini, Croatian, Yemeni and Palestinian leaders, as well the prime ministers of Russia and Greece, the Saudi Minister of Defence, the Supreme Army Commander of the UAE, as well as representatives from South Korea, Senegal, Germany, Algeria, Switzerland, Japan and China, among others.