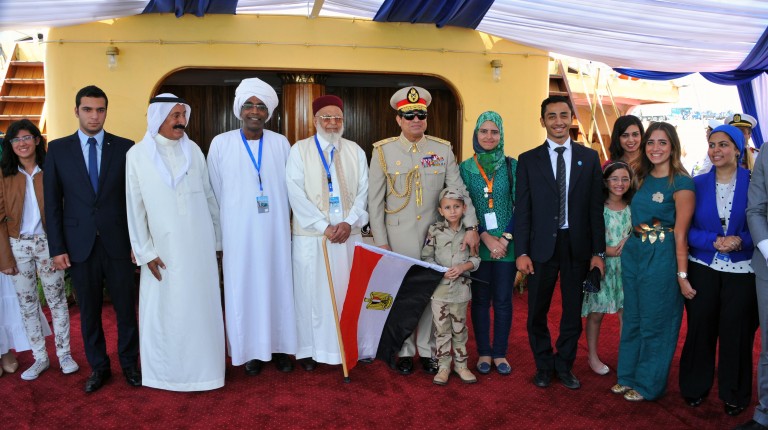 The expansion of the Suez Canal waterway and its inauguration on 6 August is a matter of “national security”, much as it is a herald of much hoped-for support for Egypt’s flailing economy.

The project is aimed at boosting Egypt’s long struggling economy, and was expected to be implemented over a period of three years. However, it was concluded in a third of the expected timeframe, upon the orders of President Abdel Fattah Al-Sisi on 5 August 2014, when he kicked off the project, two months after taking office.

The inaugurated project consists of a new parallel canal of 35 km length, which is expected to double the revenues of the waterway over the next decade as it allows reduced transit and waiting times for ships.

The canal is regarded an important international navigation canal, as it is the shortest waterway linking the Eastern hemisphere with the West, through the Mediterranean sea at Port Said and the Red Sea at Suez . It facilitates the movement of ships across the European continent to Asia without having to pass around the African continent.

Meanwhile, traffic through the canal passes through the Bab El-Mandeb strait, located between Djibouti and Yemen. Egypt, along with Gulf countries, supported Saudi-led airstrikes last March on Yemen, on the Houthi militias that expanded and took over the capital city Sanaa. Egypt announced that it will participate militarily to “restore legitimacy in Yemen”.

The significance of the Suez Canal project, moreover, is not limited to Egypt’s national economy, but also Egypt’s strategic political position regionally.

Political scientist Hassan Nafaa told Daily News Egypt that the inauguration of the new lane of the Suez Canal has great political impact and advantage for the current regime, as Egypt invited world leaders to attend the inauguration of the project on 6 August. This highlights the regime’s ability “to build its roots” throughout the past year.

The inauguration will take place with the attendance of several heads of states and governments, including Russia, France, Sudan, the UK, Lebanon and members of the Gulf Cooperation Council (GCC), as Egypt invited all nations to participate in the inauguration, according to Foreign Minister Sameh Shoukry.

Nafaa added that the world is now willing to deal with Egypt’s current regime, regardless of some nations’ disapproval of the events of 30 June and 3 July. He also referred to the challenges facing the regime, on top of which is “the phenomenon of terrorism”, noting that the regime proved to be “stable and able to accomplish” despite these challenges.

Mass protests took to the streets on 30 June 2013 calling for the ouster of former president Mohamed Morsi. The current regime has been facing, since then, a rising insurgency and militant activities nationwide, particularly in the restive Sinai Peninsula.

Last month, militant group “State of Sinai” struck a Navy warship off the coast of North Sinai. The militant group has been highly active in the region, and was formerly known as Ansar Beit Al-Maqdis, before pledging allegiance to “Islamic State”.

However, Nafaa noted that the expansion of the Suez Canal conveys an important message on the long run as this project will “alter the map of the balance of power” in the Middle East, turning the Suez Canal into the largest area of “free trade” in the world, which is subject to attract future investments.

Since maritime transportation is the cheapest means of transporting goods, expanding the canal will lead to an increase in its capacity, purportedly from 49 ships per day to 97.

The launch of the canal project further provided the regime with political gains not only on the international level, but also internally, Nafaa said. This was reflected last year in the massive turnout of Egyptians to buy interest-bearing investment certificates for the canal, after Al-Sisi announced that the project should be funded by the people. This “marks people’s trust in the current regime”, Nafaa noted.

When Al-Sisi announced the launch of the project, he refused to allow foreign investments in the project and allowed only national banks, companies and investors to finance it. The government also offered the Suez Canal certificates for individuals and institutions, which collected more than the targeted EGP 60bn over a period of eight days.

Nafaa, however, added that the current regime should have “a political vision” and to attract all the opposition forces that have not resorted to violence or “terrorism”, “as this opposition power is represented in youth groups who believe that the regime has not gained power democratically”.

He added that the inauguration of the Suez Canal project will help strengthen the power of the current regime and help it overcome this stage and face future challenges.