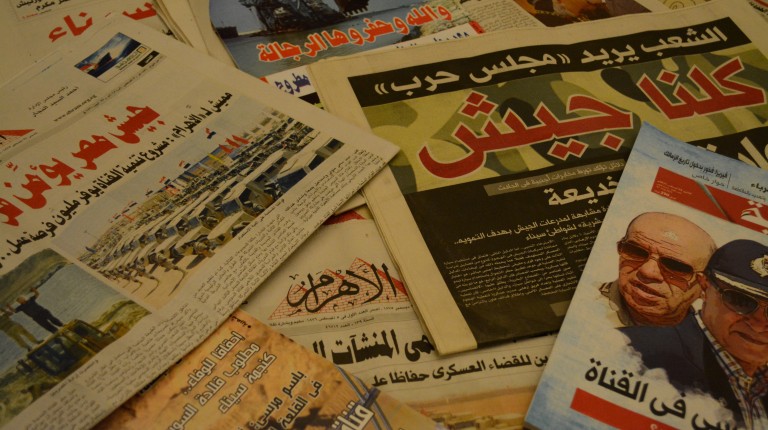 Following the three-day Economic Summit last March, which was attended by several diplomatic missions and leaders, state and independent newspapers utilised their optimistic front pages to announce the results of the conference, reporting that billions of Egyptian pounds have entered the state’s reserves. Promises of prosperity, work opportunities, and effective change were heavily used to promote the conference, which operated under the slogan of “Egypt the Future”.

Five months after the conference, however, these billions are yet to be seen by the normal citizen. As the much propagated Suez Canal opening approached, Egypt, its state institutions, and supportive media proudly presented similar promises of economic prosperity, and other billions of revenues.

To make a similar analogy to that of the Economic Summit, a look through how the new Suez Canal has been presented to the masses by the Egyptian state and its affiliated institutions and media apparatus is required.

One narrative, one goal

State media outlets, on many occasions, described the drilling as “legendary”, while citing only ministers and officials from the canal, who by default praised the project, highlighting the benefits. Politically, these benefits were drawn to strengthen Egypt’s image in the international community.

Such attitude was repeated with the Suez Canal slogan, “Egypt’s Gift to the World”, and by listing the various heads of state and high level diplomatic delegations which are going to attend the ceremony.

For example, in its 2 August issue, Al-Ahram newspaper’s front page featured a worker sipping from a cup of tea looking at the newly dug canal with the caption reading: “A smile of trust of a better tomorrow”, while the newspaper’s headline contained three boldly written words “Egypt Returns Strongly”.

A cartoon by Farag Hassan, published in Al-Ahram daily, shows a female depiction of Egypt. A woman in peasant clothes is depicted as the body of the canal, propped up by two male statues of a soldier and a civilian.

Other newspapers focused on nationalism and gave due care to the “Egyptianisation” of the project, asserting that all labour and financing is purely Egyptian. The privately owned Al-Masry Al-Youm newspaper’s front page of the 6 August 2014 issue was entitled “The Suez Canal: The Egyptian Axe and the National Money”.

Other statements depicted the canal as “Egyptian in design, funding and execution”, and the Egyptian people as “the unsung heroes, and their efforts really deserve to be praised”. Nevertheless, contradictory to such “patriotic” statements, an international coalition has been hired to promote the opening of the New Suez Canal.

Meanwhile, foreign companies all partook in the drilling process of the canal, such as the US-based Great Lakes Dredge and Dock Company, the Belgium-based Jan de Nul Group and Deme Group, the Netherlands-based Royal Boskalis Westminster and Van Oord, as well as the UAE-owned National Marine Dredging Company.

Similarly, even after the state raised EGP 64bn by selling bonds from the canal, it was granted two extra loans of at least $800m.

Additionally, foreign assistance was offered as the Suez Canal Authority signed a memorandum of understanding (MoU) with two French companies, as well as two companies from Egypt and the US, to plan the opening. Canal officials received funds from investors, businessmen, and citizens to cover the opening’s cost, rather than burdening the state budget. Crowd-funding is a common practice in Egypt since President Al-Sisi took office.

Upon completion, the project would see canal revenues increase by 259%, said Chairman of the Suez Canal Authority Mohab Mamish, up from current annual revenues of $5bn.

Meanwhile, all pro-government privately owned satellite TV stations featured a permanent countdown on their screens anticipating the event, and utilising their top anchors and talk show hosts to do mini-documentaries, “special coverage”, and exclusive interviews. The majority of hosted officials repeated the expected revenues as fact.

CBC channel, owned by pro-Al-Sisi businessman Mohamed Al-Amin, sent their top presenter, Lamees Al-Hadidi, who is also assertively pro-Al-Sisi and was a former media personnel in the campaign of ousted president Hosni Mubarak, to do an extensive interview with General Mamish, workers, and officials, who offered a sensational and nationalistic narrative of the project.

Similarly, controversial presenter Ahmed Moussa shed tears on air while talking about the project, also taking advantage of the moment to attack the Press Syndicate the National Council for Human Rights as well as opposition political parties.

“When I visited the canal, I observed the strong will of Egyptians who work in hard conditions, unlike members of the Press Syndicate and political parties who sit in air-conditioned offices,” cried Moussa, who is a known opponent of the 25 January Revolution, human rights, and opposition parties.

After the 1973 war with Israel, and the crossing of the Suez Canal, Egyptian state media and government officials started to propagate a new Egypt. A greater prosperity for all citizens was promised, to such an extent that when the government of former president Anwar Al-Sadat failed to provide these material privileges, a more class-conscious, angry wave of protests, now known as the January 1977 Uprising struck Egypt.

With the current regime facing many critical issues, such as the insurgency in the Sinai Peninsula, the rising poverty rates, increasing unemployment, the lack of a legislative body, a troubled political scene, and increased tensions between Islamists and the state, will the government be able to provide the level of prosperity its media is promising?