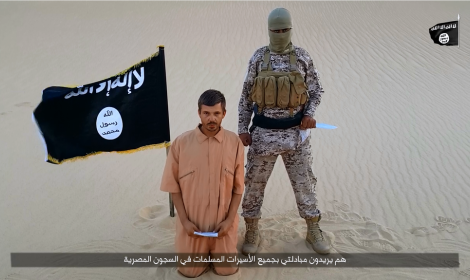 Salopek was shown in the short video wearing orange prisoner clothes, which are given to captives by groups affiliated to the “Islamic State” (IS) militant group. Right next to him is a militant in combat clothes with a knife in hand.

Salopek can be heard saying he works for Compagnie Générale de Géophysique (CGG), a French-based company that provides geophysical services to oil and gas companies.

Previously, the Foreign Ministry announced that the 31-year-old Croat “was kidnapped in Cairo while driving a vehicle to work at a French-owned company”.

According to the ministry, Salopek was stopped by a group of armed men who forced him out of his car and drove away with him to an unknown destination.

This is the first time the “State of Sinai” militant group, which had pledged allegiance to IS, claims responsibility for kidnapping foreign nationals, threatening to kill in return of another demand.

The Foreign Ministry and the Presidency is yet to release an official response on the matter.