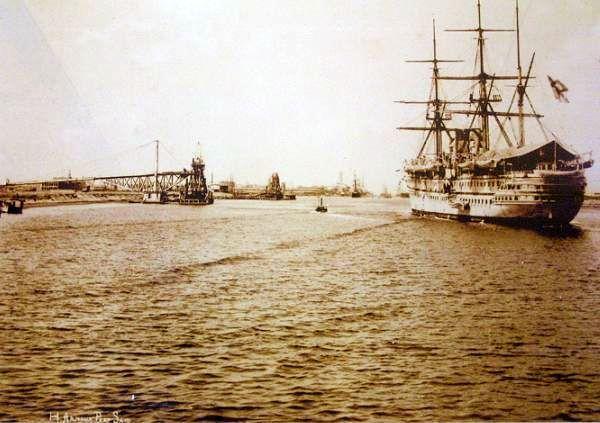 Today, Egypt celebrates the official opening of the Suez Canal expansion with the $8.2bn worth extension being referred to as “Egypt’s project of the century”, according to the country’s Prime Minister Ibrahim Mehleb.

The newly established extension has been the main topic of discussion in Egyptian media outlets, and has grasped the attention of the international community. In light of this new beginning, it is important to take a journey back in time to discover the origins of this historical project.

Daily News Egypt prepared a brief on the most significant milestones of the Suez Canal throughout the years.

The Suez Canal is the first man-made canal ever dug across a country’s land. It began by connecting the Red Sea to the Nile River and was created during the rule of the pharaohs, about 40 centuries ago.

It all began back in 1874 BCE during the rule of Senausert III, Pharaoh of Egypt. The canal however was disused and rebuilt more than once over the years, and it had different names under different rules and times of the pharaonic and Islamic eras.

The canal sees the light: The Said Pasha era

The real change occurred during the ruling of Egyptian viceroy Said Pasha, who was very much interested in the project when the French diplomat and engineer Vicomte Ferdinand Marie de Lesseps presented it to him back in 1854.

De Lesseps got the approval to create a canal connecting the Mediterranean Sea to the Red Sea, and in 1858 the La Compagnie Universelle du Canal Maritime de Suez (Universal Company of the Maritime Suez Canal) was established. The company at the time was to operate the Suez Canal for 99 years, after which it would be returned to the Egyptian government.

The French government had a majority share in the Suez Canal and Said Pasha purchased a 44% share in it to keep it operating.

Work in the canal continued, and in 1862, the first part of the canal was completed, a year after Said Pasha died, leaving the rest of the project in the hands of his successor, Khedive Ismail.

After six years of Ismail’s rule and on 17 November, 1869, Egypt witnessed the first official opening of the Suez Canal for navigation.

The 160 km long waterway was completed, and it was said that 120,000 workers had died in the process of digging the canal.

The opening was met with a huge celebration, with the attendance of 6,000 people, including several country heads, such as the Prince of the Netherlands, the Prince of Wales, the Emperor of Austria, and the Prince of Prussia, amongst several others.

Egypt has a say in the canal, then it doesn’t

In 1875, however, Egypt was facing huge external debts that led the British government to purchase the 44% Egyptian share in the project, leaving the Suez Canal under the authority of the French and British governments.

The Egyptian people had lost control of the Suez Canal for many years, until second Egyptian president Gamal Abdel Nasser took office and nationalised it in 1956. Since then, it has been operating under the supervision of the Suez Canal Authority being completely managed by Egypt.

After nationalisation, the canal faced two closures – one in the year of its nationalisation with the Tripartite Aggression, where British, French, and Israeli forces invaded the country. However, it was reopened for navigation a year later. The second closure lasted a while longer, starting from 1967 during the Egyptian war with Israel.

It was reopened under the rule of Anwar El-Sadat who became president of Egypt after the death of Nasser. El-Sadat opened it in 1975 after the end of war with Israel.

The Suez Canal is a strategic point of trade, being one of the busiest waterways used all over the world.  The canal separates Asia from the African continent. It also allows ships to pass between Europe and the lands around the Indian and western Pacific oceans through a short link.

Modern ships pass through the canal on a daily basis, with the waterway bringing about huge financial returns to the country. Since its nationalisation in 1965, income from the Suez Canal in the Egyptian treasury has amounted to more than $50bn. It represents one of the most important sources of national income within the economy and it is a vital source for hard currency.

President Abdel Fattah Al-Sisi announced in August 2014 the implementation of the Suez Canal expansion project, which is an extension parallel to the original 145-year-old canal. The project was scheduled to be finalised within three years. Al-Sisi, however, tightened the deadline two years less.

The extension of the canal has a total length and depth of 72 km, being deeper than the original to accommodate bigger ships that could not pass before.

With the new project, the government aims to decrease the period it takes cargo ships to cross and simultaneously increase their flow. It is forecasted that Suez Canal income will increase by 259% before 2032 to reach around $13bn annually, up from $5bn.

The expected increase in revenues, however, seems to be too far-reaching, according to economist and founding member of the Public Front of the Suez Canal Rasha Qenawi.

She added that, even after the toll fee increases, the expected revenues would only be $8bn or $9bn.Further, a number of international media outlets have stated that the expected figure is an exaggeration.

There have been several doubts of the project being completed within the specified deadline; however the goal was achieved and on 25 July 2015, three cargo ships crossed through the new expansion in a trial operation before the official opening.

At the time, Chairman of the Suez Canal Authority Mohab Mamish announced the success of the operation, adding that the trial proves that Egypt has the ability and capacity to establish successful mega projects.

With the new extension, the daily average number of vessels transiting in the canal is expected to increase from 49 to 97.

The national project is expected to provide one million job opportunities for Egyptians within the coming 10-15 years. Meanwhile, according to the Suez Canal Authority, those who worked on the extension of the canal amounted to about 50,000 workers, who took part in the construction as well as the drilling operations of the expansion project.

A short while after Al-Sisi announced the new national project, the Central Bank of Egypt (CBE) issued investment certificates for Egyptians as a mean for financing the new project. Within eight days, banks successfully surpassed the EGP 60bn target.

The five-year Suez Canal investment certificates were issued at an interest rate of 12%, in denominations of EGP 10, EGP 100, and EGP 1,000.

Egyptians were highly drawn towards purchasing the certificates, with 82% of the buyers being individuals. Certificates of the lower values of EGP 10 and EGP 100 were sold at a total rate of EGP 15.7m.

The plan had been in waiting for some time

Public introductions to the Suez Canal expansion project were made in the 1990s when former prime minister Kamal El-Ganzouri was in office. The project faced some technical problems and was hindered for several years. During the mid-2000s, the project was reintroduced under prime minister Ahmed Nazif and then again by former president Mohamed Morsi. However, none of them took any bold steps to make the project see the light.

Rasha Qenawi previously spoke to Daily News Egypt, discussing the Suez Canal Axis Development project, which is different from the inaugurated extension. “The development project was first introduced during the [Mohamed Anwar] Al-Sadat’s term with minister of housing Hasaballah El-Kafrawy,” Qenawi said, adding that the project “was placed in drawers [not implemented]”.

She stated that, during the Mubarak period, the “political motivation to implement the project was absent”.

Qenawi added that, during Morsi’s rule, the same project was adopted.

The future holds an even bigger project

The Suez Canal extension project is not the end of the journey, as the government plans to implement an even bigger project, the Suez Canal Axis Development project.

The project involves developing the area surrounding the canal, and in turn transforming it into a global logistics hub.

Also amongst the other services that are expected to be provided in the future are cleaning and painting ships, as well as refuelling and repairing them.

The government previously announced that the canal’s development project is expected to raise revenues of the broader canal project to $100bn.

To date, however, it seems that the Egyptian government has not correctly marketed this more ambitious project to the international community.

The German ambassador to Egypt and the Chairman of the Canadian Chamber of Commerce told Daily News Egypt that they do not have the specific or comprehensive details of the project and the opportunities that investors can participate in.

Moreover, during the March Economic Summit, the development project was presented to investors but did not draw any attention and no one announced their participation in the project, even though a few days ahead of the summit, Mamish announced that it would be the most important project presented.

There is no doubt that completing the Suez Canal extension project on time is a positive sign. The work, however, will not and should not stop there. Great attention should be drawn towards the Suez Canal Axis Development project, as higher hopes of economic development are associated with this project being accomplished.

Only years will reveal whether Al-Sisi and his government will be able to complete another successful step, or whether this will be the end of it.